Zeta Defender founded his CN nation, Powerious, on April 26, 2007. Originally, Zeta and a few friends started out on NationStates. They did the current events for a while, and then after getting bored of it, found CN and joined Planet Bob, since it was more interesting and enjoyable. Zeta Defender was able to get most of his friends to join CN. Even though Zeta's NationStates interest has faded, his heart over there will remain with the Pacific.

When Zeta Defender joined Planet Bob, he wanted to join the same alliance as his friends. Due to a mistake with the lettering, however, he joined the New Pacific Order instead. He believes that this was fate telling him where he was supposed to go, and where he would find a home on Planet Bob. He submitted an application to join on the 28th of April 2007, and was accepted into the Order soon afterwards.

He has remained with the Order ever since, proud to be a Pacifican.

Membership in the New Pacific OrderEdit

After being granted full membership, Zeta Defender learned the ropes of the CN system. Once he was in Gamma Battalion, a fellow comrade of his was attacked by a NPO ghost. In turning to the NPO's Praetorian Guard for help, Zeta saw what the PG did and wanted to join up and help that elite group. After serving his time as a PG recruit, Zeta was taken in under the wing of the Brotherhood of the Praetorians. From those humble beginnings, with the assistance and guidance of the Master Praetorians of the day, Zeta rose to become a full member of the Praetorian Guard in July 2007.

Thanks to Zeta's hard work and unyielding resolve, he rose up through the ranks, becoming a Centurion on August 31, 2007. He was the replacement for Umbrae Noctem who was promoted to Procurator (Now the High Command Prefect Position). Zeta's new position as Centurion gave him some very large shoes to fill, but by never giving up and keeping a level head in heated situations, Zeta continued to work his way up the Praetorian Guard, rising to the rank of High Command Prefect on July 1, 2008.

Along with his rise to glory in the Praetorian Guard, Zeta has also involved himself with myriad other departments within the New Pacific Order. These include the NPO Military Command and Military Intelligence, the Diplomatic Corps, the Tech Corps, and the Mentor Corps.

During his time as a Pacifican, Zeta Defender has made friends with several other notable Pacificans whom he deeply respects, and considers to be role models to emulate. The first of these is Umbrae Noctem, whom Zeta admires for his ability to get anything accomplished and for not letting anyone ever tell him no. Another notable influence on Zeta is Loucifer, who has provided advice and guidance to him a number of times; Loucifer listens, is very supportive, and always know what to say. Zeta also admires the Order's current Emperor, Cortath, for his ability to be a peace maker, for never letting his emotions get the better of him, and always being able to reach a compromise.

Zeta Defender held the position of High Command Prefect in the NPO's Praetorian Guard. He current serves the Guard in the honorary position of Evocati. His duties include assisting the current leadership by offering advice and suggestions on current matters under the watch of the Praetorian Guard. Prior to his duties as an Evocati Zeta was the High Command Prefect, he was responsible for all day to day oversight and responsibilities in regards to spies, ghosts, et cetera. His responsibilities in this position also included coordinating with the NPO's Military Command and Military Intelligence.

The Praetorian Guard is Zeta Defender's favorite department, his "first love" as it were, as the PG was the first department he joined. After serving in the PG for 3 years as a Praetorian, almost 2 yrs as a Centurion, and now as HC Prefect, Zeta knows every procedure for the department. He has rewritten many of the guides in current use to reflect the changes across Planet Bob and in the NPO.

On April 14, 2012 Zeta was promoted to Imperial Officer of Internal Affairs, effectively moving him outside of Economic Affairs. However he was made a consultant to provide advice and guidance to the current Economic Affairs leadership.

Zeta started working in the Diplo Corps towards the end of the summer of 2007 at the request of Noob5 that all Praetorians help the Diplo Corps out since the Diplo Corps were short staffed at the time. His first assignment was Atlantis and he stayed there from being assigned in the Summer of 2007 to when they disbanded later on. After they Disbanded, He was assigned to Greenland Republic, and while at GR he took over as a Polticial Analyst. He retired from Diplo Corps originally when he got High Command Prefect.

Zeta Defender last held the position of Executive in the NPO's Tech Corps. As an Executive, Zeta was responsible for making sure that the entirety of the Tech Corps was running smoothly, and exercised day to day oversight in regards to technology. His position as an Executive also included coordinating with the Pacific Bank.

The Technology Corps was one of Zeta's favorite departments. After the events of Cobrastrike, Zeta, Loucifer and Cortath played an integral part in rebuilding it from the ground up. Zeta has given a very large part of himself to the Tech Corps during his time in the Order, almost five years!

Zeta was invited to the Imperial Advisory Committee on July 18, 2009 by the Emperor Moo. He was selected due to having demonstrated loyalty and trustworthiness many times over and having demonstrated his capabilities many times over in his jobs, mainly the Praetorian Guard and the Tech Corps. His duties in the IAC were to provide advise/input directly to the Imperial Officers and Emperor on alliance matters, essentially as a think-tank.

During his short time in the Imperial Advisory Committee, Zeta was involved in the discussions which led Moo to creating the position of Imperial Officer of Technological Affairs, separating the Tech Corps from the Pacific Bank who would still be under the Imperial Officer of Economic Affairs. Cortath and Loucifer were the only "Tech IOs" and after Loucifer was moved to Military Affairs IO the position was abolished by Emperor Cortath and there was once again two Economic Affairs IOs.

Another monumental internal change occurred while Zeta was a member of the IAC. The Special Community Service structure for NPO's Internal Affairs was broken up into individual departments and overseen by the Council Pacifica. 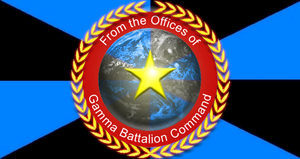 Zeta Defender is the squad leader and founder of Infinity Squad, a Zeta Battalion squad organized in May 2007, shortly before the outbreak of the FAN-WUT War. Infinity Squad has the distinction of being one of the longest standing squads in the Order's history, and under Zeta's leadership it has retained its members and stayed active throughout its three years of existence.