The Unholy Alliance is a Mutual Defense and Optional Aggression Pact between Mushroom Kingdom and The Order of the Paradox. It was announced on December 18, 2010 by Archon.

A. Both High Contracting Parties obligate themselves to desist from any act of violence, any aggressive action, and any attack on each other, either individually or jointly with other Powers.

A. The Governments of the two High Contracting Parties shall in the future maintain continual contact with one another for the purpose of consultation in order to exchange information on problems affecting their common interests.

A. The present Treaty is concluded for a period of ten years, with the proviso that, in so far as one of the High Contracting Parties does not advance it one year prior to the expiration of this period, the validity of this Treaty shall automatically be extended for another five years.

A. A secret clause is to be upheld by the High Contracting Parties and is to remain a secret between them. 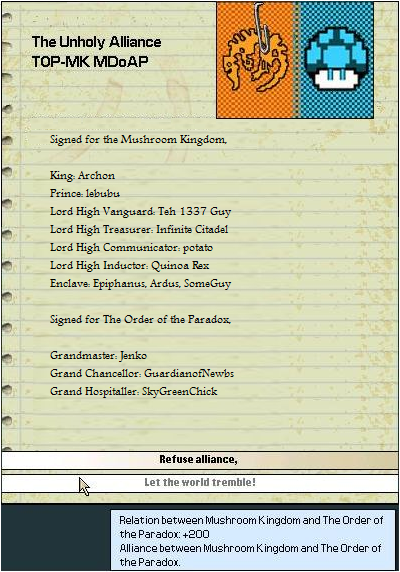 Signed for the Mushroom Kingdom,

Signed for The Order of the Paradox,

The treaty spawned many OWF signatures, some of which are featured below.

Retrieved from "https://cybernations.fandom.com/wiki/The_Unholy_Alliance?oldid=481231"
Community content is available under CC-BY-SA unless otherwise noted.