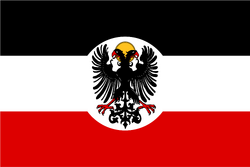 The Imperial Charter of The German Empire (German: Reichssatzung des Deutschen Reich) is the basic law and highest administrative document of The German Empire, establishing basic institutions, order, and procedures. It provides the legal foundations for the alliance's legal system, government, members, and military.

Präambel: In the interest of preserving those most sacred principles of monarchy, alliance unity, and law and order, these tenets and laws are set forth as a Charter and Constitution. It is the duty of the people of this alliance to maintain this Charter, to look to it for guidance, and to abide by it in all things. It is the duty of the government of this alliance to defend this Charter, to abide by it in all actions, and to clarify it and alter it only when deemed absolutely necessary by the Kaiser and Reichskanzler

This is a sovereign alliance, entitled to all rights there accorded by international law. The name of this alliance shall be The German Empire, and it shall be abbreviated TGECN.

Any nation wishing to join The German Empire (hereafter TGECN) must be in fulfilment of the following requirements:

A Citizen Nation of TGECN may resign from TGECN provided the following:

Par. III: Enemies of the Reich and Persona non grata

Any Citizen of The German Empire found in transgression of this document or any other law of TGECN shall be subject to Court Martial, and, if found guilty by the Tribunal duly appointed, shall be subject to any punishment deemed appropriate by the Kaiser, including ejection from TGECN and absolute destruction (ZI), but not PZI or EZI (Permanent or Eternal Zero Infrastructure). Separate from this, the Kaiser and Reichskanzler may declare any nation persona non grata of TGECN, meaning that the nation in question is not welcome on TGECN’s forums, IRC channels, or allowed to interact with any member of TGECN. TGECN citizens who knowingly associate with a nation declared persona non grata in any way pertinent to CyberNations shall be subject to investigation and, if deemed appropriate by the Kaiser, Court Martial.

Par. I: The Reichsregierung

The Goverment of TGECN shall be called the Reichsregierung and shall consist of the following:

All names and titles shall be pursuant of The Imperial Orthography Act of 22 December 2011 under the previous Constitution. The IOA shall henceforth be considered a Constitutional Document.

The German Kaiser is the Head of State of TGECN. In the case of a female, the title shall be Kaiserin. He is responsible for directing the Reichsregierung in accordance with the the Laws and Customs of TGECN. The Kaiser is appointed by his predecessor with the approval of the Reichsregierung. He must be a member of TGECN with a nation whose official AA is “The German Empire” both in-game and on the CyberNations Forums. He serves for life or until abdication (i.e. until he quits the game or until he voluntarily relinquishes the throne or leaves TGECN). In all questions and affairs, the Kaiser has the final authority.

In the case that the Kaiser feels unable to perform his duties but is unwilling to abdicate, he may appoint a Regent to reign in his place. The Regency shall be relinquished upon the return of the Kaiser to the game. If the Kaiser does not return in six months, or if he falls out of contact with TGECN for that space of time, the Reichsregierung may vote to elevate the Regent to the throne.

The Kaiser shall appoint his successor. In the case that such an appointment is impossible, the DHH shall elect a new Kaiser from its own number.

•As stipulated in the Imperial Orthography Act, the German House of Lords shall be the standing governing body of TGECN and shall be comprised of the Kaiser and the Reichskanzler.
•All Reichsministers upon appointment automatically become members of the DHH, and retain their membership after retirement unless forcibly removed by the Kaiser after consulting the Reichskanzler.
•The Deutsches Herrenhaus (hereafter DHH) shall be called at the Kaiser’s leisure and shall require a ¾ vote to admit new members.
•Those Reichsministers who retain their membership in the DHH as per Article 3b. shall be designated as "Life Peers" or as a "Reichsminister Emeritus" after their departure from ministerial office.
•"Life Peers" shall be designated separate from "Sitting Peers". Sitting Peers comprise all active Reichsministers, the Kaiser, and the Reichskanzler. If any new Reichsministry is created by the Kaiser, the citizen designated as Reichsminister becomes a Sitting Peer.
•For a bill to pass through the DHH, all Sitting Peers must vote either "ja" or "nein". All bills pass with an absolute majority (5/6).
•Life Peers shall retain the ability to vote in the DHH, but their vote is not necessary for a bill to pass. In such a case, their votes shall be counted if there is not a unanimous decision by the Sitting Peers. In the case of a unanimous decision by all Sitting Peers, Life Peer votes will be voided.

The Reichsminister of Foreign Affairs is responsible for overseeing, maintaining, and building positive relations between TGECN and other AAs. He is responsible for administering the distribution of ambassadors to foreign alliances, as well as ensuring that the information that they provide is accurate. All Reichsministers serve at the leisure of the Kaiser, and may be replaced without notice, but may not resign without notifying the Kaiser.

The Reichsminister of State Affairs is responsible for administering the Financial, Educational, and other Developmental areas, and oversees two Unterministers, the first of which (Finance) oversees all Tech Deals and Trade Circles, and the second (Recruitment) oversees the recruitment and the admission of new citizens. This Reichsminister himself handles all Education, including the Ruprecht-Karls-Universität.

The Reichsgeneral is responsible for administering all military-related activities as well as ensuring that the entire citizenry is well prepared for military action. The Reichsgeneral appoints a Generalfeldmarschall and all subordinate ranks with the approval of the Kaiser and Reichskanzler

The Reichsminister for Propaganda and Public Enlightenment is responsible for all graphic design work related to TGECN, including recruitment posters, government graphics, forum signatures and maintains the avatar gallery, among other duties appointed him by the Kaiser or Reichskanzler.

The Kaiser may create additional Reichsministries at his discretion.

Should it be deemed necessary by the entirety of the Reichregierung, the Kaiser may be granted Absolute and Unconditional rule for a period assigned by the DHH upon granting said rule. The Kaiser must surrender absolute rule at the end of this period or face ejection.

Any member of the Reichsregierung may request a Court Martial of a Citizen. The Reichskanzler will validate the accusations and call a Tribunal consisting of the sitting DHH. The Kaiser will appoint punishment if the accused is found guilty.

Ghost status is defined as a nation wearing an AA of TGECN who is not recognised by TGECN as a member. The DHH and Reichsmarschall shall keep a list of all ghosts for destruction. ZI is “Zero Infrastructure”, and may be used as a punishment for any citizen of TGECN. The practise of ZI shall not be extended to Permanent or Eternal Status (PZI or EZI) under any circumstances.

The Kaiser may Declare War on a foreign AA only with the unanimous support of the DHH. Upon a Declaration, an official Announcement must be made both on the TGECN Forums and on the CN Forums with a reason for declaration in both announcements. Upon Declaration of War, no new citizens shall be admitted and no citizens shall be allowed to resign. Those who do resign shall be treated as deserters and ZI’d.

The Reichskanzler may issue Edicts which temporarily circumvent this Charter in times of need. These Edicts must be approved by the Kaiser, and must contain a time frame in which they are active. This time frame may not exceed six months.

The DHH may choose to amend this document at any time with an absolute majority and the approval of the Kaiser.