Charter of the Sons of Muspel[]

In Norse mythology, Muspelheim is home to the fire giants and their master, Surtr. Muspelheim itself a land of fire. To its north is Niflheim, a land of ice. The proximity of the two creates water and the Ginnungagap, a vast wasteland from which springs what today one would call the building blocks of all life.

Sparks from Muspel created all heavenly bodies, as well as the earth itself. In the distant past, the Norse would swear "by the fires of Muspel" as their highest oath, for by it they were swearing to the Creator of the universe Himself.

With this in mind, the Sons of Muspel welcome all into our ranks, for we are all the product of this Divine Spark.

The Sons of Muspel are a Green Team alliance committed to the development and mutual defense of their members and the honorable defense of friends and allies outside the alliance.

Membership is open to any nation belonging to the Green Team that is neither at war with another nation, in debt to a previous alliance nor on the perma-ZI list of another alliance. Applicants to the Sons of Muspel must have a Nation Strength of 5,000 or more.

When applying for membership, applicants shall be required to change their Alliance Affiliation to "SoM Applicant" until their request is processed and approved by the Order of Surtr.

Non-Green nations applying for membership shall have a maximum of thirty (30) days in which to change to the Green Team.

Color exemptions shall be granted only by consent of the Order of Surtr.

Exemptions to the 5,000 NS requirement may be granted when individuals have had to re-start their nations or in those instances when nation leaders are already known to the leadership of the alliance.

Individuals wishing to resign from the alliance must contact the Order of Surtr, giving a reason for their departure. All debts to the alliance must be paid before a resignation shall be accepted. Those who leave the alliance without authorization or during wartime shall be considered spies or traitors and subject to perma-ZI.

Nations found to be in violation of this Charter or other Government directives shall be subject to disciplinary action as decided by the Order of Surtr.

The Order of Surtr[]

Government matters are entrusted to a high council, known as the Order of Surtr, comprised of the following members:

The Foreign Affairs Counselor shall be the official spokesman of the alliance.

When issues arise requiring immediate attention, any member of the Order of Surtr may speak on behalf of the government. Otherwise, all decisions made by the government (including treaties) require the approval of a majority of the Order.

The fundamental tenets of the alliance's foreign policy shall be peaceful co-existence with our neighbors and unconditional defense of our allies.

In accordance with The Doctrine that is the Dilber/Bilrow Love Child, the Sons of Muspel shall support Senate candidates as designated by the Grand Global Alliance. Member nations in violation of this Doctrine shall be subject to its penalties.

War represents the ultimate sacrifice on the part of an alliance member. As veterans of numerous conflicts, the founders of the Sons of Muspel recognize war's destructive power.

Therefore, the Sons of Muspel announce that we shall declare war as an alliance only if one of the following conditions is met:

1.The Sons of Muspel are attacked by an outside alliance

2.An alliance with whom we have a relevant treaty requests our support

3.An outside alliance engages in espionage upon the Sons of Muspel

Notwithstanding the above, the Sons of Muspel pledge to resolve international disputes through diplomatic means whenever possible.

Attacks by individual rogue nations upon members of this alliance shall not require a formal declaration of war. Neither shall our attacks upon members convicted of desertion and/or espionage.

In-game spying upon the Sons of Muspel shall constitute an act of war by the spying nation and shall be dealt with accordingly.

Finally, the Sons of Muspel renounce the right to engage in so-called "tech-raiding" upon smaller alliances, limiting themselves to raids upon unaligned nations alone. Sons of Muspel members shall be individually accountable for their actions in said matters.

The alliance shall maintain programs to promote the growth of its smaller member nations, reserving the right to alter those programs as circumstances dictate.

In the Elder Futhark, Muspel begins with the Runic character "Mannaz" or "Manwaz".

On its own, the character itself represents "Man" or, more accurately, humanity as a whole. This is entirely appropriate given that the universe, and therefore all within it, are the product of Muspel's refining fire.

The Sons of Muspel therefore adopt this Rune as their official symbol.

All matters not covered explicitly by this Charter remain the prerogative of the Order of Surtr or its designated representatives. 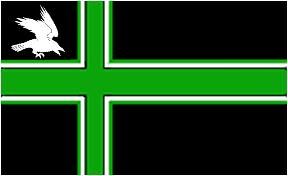 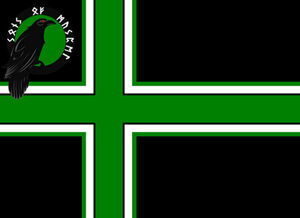