The Socialistic Empire is a alliance devoted to the ideals of Socialism. This alliance is dedicated to defending and further spreading leftist ideologies in the Cyberverse. The –SE- will endorse all leftist ideologies, and will always seek cooperation with other leftist alliances. With a strong, representative government it will stand firm against any storm and will overcome any problem, recognizing its responsibility to defend the Left in CN.

Any nation that wishes to join the –SE– must fill out the following form, and post it on the –SE– Imperial Forums:

Once a nation becomes an official member of the –SE–, it is forbidden to:

All members of the –SE– are encouraged to:

I. The People of the Empire: The most fundamental part of Socialistic Empire consists of the citizens of the Empire. They are the essence and the guardians of the alliance. The People elect directly their representatives, The Peoples’ Assembly. Voting is universal and equal and shall not last for more than 24 hours. All powers derive from the People and exist for the People and the Alliance; they shall be exercised as specified by the Memorandum The government structure of the Alliance is founded on the free formation of opinion, on equal suffrage and compliance to decisions of the elected representatives of the People.

II. The Peoples Assembly(PA): The Peoples’ Assembly consists of 5 members, elected by the People as their representatives and forms the main government body of the Socialistic Empire. The PA, after taking into consideration the suggestions and proposals of the citizens makes policy decisions that shall affect the alliance. In the state of emergency and urgent situations specified under 1.2, the Peoples’ Assembly can put into effect executive orders. The PA can override an Executive Order over 24 hours. The PA carries the right to change SE's Charter as specified under 1.2.IV A member of PA can be removed from his position after failing to be active for 3 months or being outvoted by the rest of 4 other members of PA for committing crimes or treachery against SE and the implementation of the Socialist ideals within SE. The members of PA vote from within their ranks the Supreme Commissar Each and every remaining member of Peoples Assembly is appointed a ministry, hence considered as relevant Commissar.

i) Supreme Commissar (SupCom):The Supreme Commissar is the main representative of SE and is formulating plans to help achieve the mandates proposed by PA. SupCom is the head of the PA, nevertheless equal among the Commisars. The SupCom will be appointed by the rest of Peoples’ Assembly for a period of 3 months, but with a majority decision of the PA, emergency elections can be held in order to replace the SupCom. The SupCom has the right to nominate the Marshals of the Peoples’ Army. Under the special circumstances and urgent situations defined under 1.2 the SupCom can be put in charge of the whole alliance by the PA for 1 month. As a result the SupCom will have the right and the responsibility to make all decisions regarding the politics of SE, except changing SE's Charter.

ii) Defense - Intelligence Ministry (DM) – run by a Defense Commissar (DefCom). The Ministry is in charge of all Military matters. It grants sanctions to –SE– members to attack unaligned nations/rogues, and assigns nations to carryout military punishments. During war the DM acts as the HQ for the Imperial Peoples' Army, where the Marshals receive orders from the DefCom or directly from the SupCom. The Ministry is also in charge of searching for spies within the alliance and gathering vital intelligence (without resolving to spy operations) across the Cyberverse.

iii) Economics Ministry (EM) – run by an Economics Commissar (EconCom). The Ministry is in charge of all economic matters, like directing aid, organizing bank nations and organizing internal and external alliance trade within the official -SE- Team Color (Black).

iv) Social Ministry (SM) – run by a Social Commissar (SoCom). The Ministry is in charge of recruitment, providing education for new CN players about the game and making propaganda.

v) Foreign Ministry (FM) – run by a Diplomacy Commissar (DipCom). The Ministry is in charge of Diplomatic Relations, and the DipCom is to appoint Ambassadors and act as a Diplomat in important situations, like negotiations of a higher level.

I. Executive orders: Include measures taken by the PA in order to face the conditions described in 1.2.III without appointing the SupCom with the entire control of alliance politics. They can be in effect for 24h (+24h extended). Executive orders are not to be debated and are to be applied instantly.

II. State of emergency: Is declared by the PA under the conditions described in 1.2.III and allows the PA to issue Executive Orders.

III. Urgent situations and special circumstances: Include Major war (SE engaged in a war with an alliance that has more than 2/3 of SE’s NS), coup attempt and civil war (with more than 1/10 of alliance members involved).

IV. Revision of the Memorandum: The Preamble, Chapter II article 1.1 (parts I, IIAi) and 1.2 cannot be changed under any circumstances. Any attempt should and would be considered as highest treason against the SE and the Socialist Ideals that SE is built upon.

The Imperial Peoples’ Army is the main Military Body of the –SE–. The army is divided into several Battalions, according to Nation Strength. Each Battalion is appointed a Marshal, who commands his Battalion according to the orders he receives from the DM.

The Imperial Peoples’ Army must obey a strict Codex of Warfare and Honor:

The –SE– has a set of specific symbols that represent what it stands for:

The –SE– has an official flag that consists of a golden hammer and sickle in front of a red star. The background is black to symbolize both the Power of the People and the oppression of ages past. The golden lines symbolize the bright way to socialism and lead to the star that is placed at the center of the flag. Red symbolizes socialism. 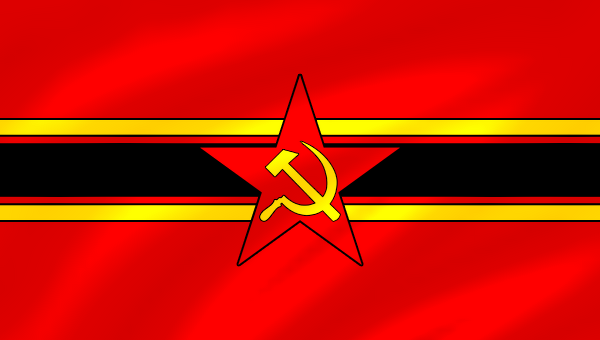 Exceptional Duties Award
Add a photo to this gallery

Hero of the Socialistic Empire
Add a photo to this gallery

Awards and Medals can be officially presented to any member of the Socialistic Empire only by the SupCom, either of his own will or by a suggestion of any Commissar (they can propose giving medals to members not only from their Ministry, but to other Commissars as well). The only way the SupCom himself can be awarded is if all Commissars agree to present him with any of the above medals and awards.

Retrieved from "https://cybernations.fandom.com/wiki/Socialistic_Empire?oldid=463137"
Community content is available under CC-BY-SA unless otherwise noted.