It is one of the founding members of the Soviet Union of Socialist Republics.

Before becoming a colony of the Pacific Empire, Vietnam was a prosperous nation having a growing economy and a strong military backed by its allies, the People's Republic of China and North Korea. However, during a certain period in time, China faced internal conflicts with its own citizens while North Korea faced more serious tensions with South Korea.

Left alone, the Imperial ATLANTIS found a chance to expand its territories more. With the continuing exhaustion of resources to repel the invaders, Vietnam's economy collapses and was forced to surrender because of the lack of funds.

During the Great Pacific War, the People's Republic of China sent military supplies to Vietnamese rebels trying to separate from the Pacific Empire. The influx of weapons gave the Vietnamese separatists the strength to fight against the Imperial Military which eventually lead to the Rebellion of Vietnam.

During the course of the rebellion, Daniel Bullock offered Nguyễn Dũng Trọng, the leader of the Vietnamese separatists, to join the Soviet Union of Socialist Republics. With support from the Soviet Union, Nguyễn Dũng Trọng announces the declaration of the independence of the Socialist Republic of New Vietnam. Starting from the south Vietnamese regions, New Vietnam began liberating itself from the Empire eventually gaining full control of the whole state although at a very high cost.

Currently, New Vietnam is reconstructing itself from the war with help from its allies and from the war reparations payment from the Pacific Empire as stated in the PEACE Pact.

The Socialist Republic of New Vietnam is a single-party state. The main role of the Communist Party of Vietnam is to be involved in all organs of government, politics and society.

Only political organizations affiliated with or endorsed by the Communist Party are allowed to contest elections; non-affiliated or sponsored organizations are free to exist however. These include the Vietnamese Fatherland Front, worker and trade unionist parties. Despite the state officially committed to socialism, it is noted that, due to the influence from the Pacific Empire, holds capitalist characteristics.

The President of Vietnam is the titular head of state and the nominal commander in chief of the military of Vietnam, leading the Council on National Defense and Security. The Prime Minister of Vietnam, is the head of government, presiding over a council of ministers composed of three deputy prime ministers and the heads of twenty-six ministries and commissions.

Under the Supreme People's Court stand the provincial municipal courts and the local courts while military courts are also a powerful branch of the judiciary with special jurisdiction in matters of national security. All organs of Vietnam's government are controlled by the Communist Party and most of the government appointees are members of the party. The General Secretary of the Communist Party is the most important political person in the nation, controlling the party's national organization, state appointments, and its policy. 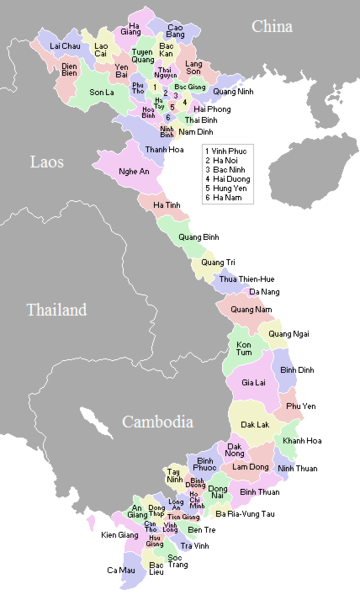 The economy of New Vietnam is centered in agriculture, fishing, forestry, mining, tourism and manufacturing. The government uses a five-year plan to control the growth of New Vietnam's economy. Its main exports are agricultural products like rice, cashews, black peppers, coffee and tea.

Hai Phong Class Submarine
Add a photo to this gallery

New Vietnam is a member of the Soviet Union of Socialist Republics and is one of the major allies of the People's Republic of Grand China and the United Korean Supreme Republic.

Retrieved from "https://cybernations.fandom.com/wiki/Socialist_Republic_of_New_Vietnam?oldid=411438"
Community content is available under CC-BY-SA unless otherwise noted.