The Snake Eyes War (known to COBRA as The Korlithican Wars was a war between the Freehold of The Wolves (and allies) and COBRA (and allies) over failed diplomacy in the wake of a raid against an alleged FTW protectorate. A likely secondary cause was bad blood from previous conflicts between the two alliances (The FTW-Kashmir War and the Interstellar Wolf with Claws - COBRA war, both fought in 2018).

On March 3rd, 2019, the nation of Korlithica, a member state of the Sellswords, a COBRA mutual defense partner, launched two unauthorized raids against two ANiMaLz nations. The aNiMaLz AA was under the protection of FTW until March 3, the date of the attacks. FTW felt that the protection was inclusive of that date,and that only 89 days had passed, while COBRA maintained that March 3 meant the protection had expired. Peace was offered, then rejected by the two aNiMaLz nations. Communications were established between FTW leadership and that of COBRA's, but the diplomacy was verbal and ambiguous: It was decided that Korlath would fight two rounds of war.

On March 13, Korlath moved to the Kashmir AA while still fighting a second round of war with FTW. At this point, Sellswords and their allies (Kash/COBRA) were all under the impression that this was the end of the dispute as they had believed rounds to mean individual wars, instead of the amount of time Korlath would be at war. A 'round' is 7 days and is generally used to describe an amount of time two entities are at war, not the individual wars between said entities. FTW understood the agreement as an amount of time to be at war with Korlath and launched another individual war on March 15.

FTW leadership messaged COBRA letting them know the latest attacker would peace with the rest at the end of 2 rounds. Again, diplomacy failed the parties: COBRA leader General Kanabis claimed that, due to RL/Time Zone complications, the attack was not called off. FTW believed his claim an excuse. Hostilities began that night with COBRA declaring war on FTW. Each alliance's arguments can be read in detail in the COBRA Dow thread.

The war began officially on March 16th, 2019, with COBRA's Declaration of War against the Freehold of the Wolves. Eventually, the Roll For Initiative bloc, of which FTW is a signatory, entered on their behalf as did new ally LoSS. COBRA was joined by allies Kashmir (who were in turn supported by the Screaming Red Asses) and The Imperial Entente. This entry caused ruffled feathers in the FTW coalition, as the legality of TIE's entry was disputed by FTW, who claims TIE did not properly and clearly cancel their treaties with FTW prior to attacking. TIE denies this. Argent would subsequently counter SRA in defense of FTW.

Other, seemingly unrelated, entries into the war were by Non Grata and Gibsonistan. Neither seemed to have any motive or interest in the nexus of the conflict; Non Grata likely entered as an extension of Caustic's Balls of IRON/End Times campaign, while Gibsonistan, who entered as a single nation under the long-defunct SuperFriends marquee, possesses motives that may never come to light.

On July 14th, 2019, General Kanabis, King of COBRA, announced that at the end of the war, he will be retiring and handing the reigns over to Johnny Apocalypse.

On May 5th, 2019, COBRA approached FTW and the rest of Roll For Initiative at the behest of NpO to begin peace talks.

These terms were rejected in short order by COBRA Coalition.

In May and June, COBRA appointed representatives from the New Polar Order communicated additional offers to the Cobralition that were as simple as admitting defeat and arranging tech deals between the combatants. For several months, there was no response, even as RFI representative Tevron frequently contacted the Cobralition representative about these terms. COBRA representatives stated that they were under consideration, but later discussions with COBRA in June and July suggested that COBRA was unaware of the lighter terms communicated to them. Later logs confirmed that Cobralition was informed but apparently not cognizant of the terms due to an internal oversight. After these months of delays, Cobralition, in the middle of July 2019, agreed to admit defeat and end the war, while Non Grata and FTW agreed to continue fighting. On July 19th, 2019, Non Grata officially declared war on FTW. This led to the Yin-Yang War. During this time, GATO and the Legion insisted on following a tedious voting procedure, which delayed peace talks even further. Had they made up their minds sooner, peace would have been established well before the NG dec of war. As this was not the case, COBRA had time to express last-minute concerns about the peace agreement, which led to another delay and eventual silence.

On August 10th, 2019, Johnny Apocalypse, the King of COBRA, announced that the Cobra Coalition admits defeat to the Roll for Initiative. All current wars are allowed to expire. No new wars will be declared between the two forces. 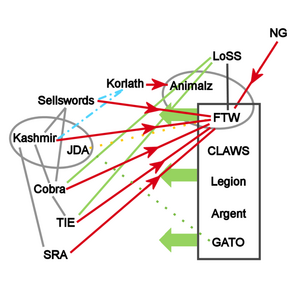