The nation of Serine is a relatively young nation, located on the northwest coast of Africa. It is currently ruled by Czar Garrett, the Lord Imperious of the Nation.

Serine was founded on April 28, 2006 by its current ruler, Czar Garrett. Its capital, Anthracus was built on the former city of Safi. The surrounding country side was converted into agricultural land for cattle, and the nearby hills were dug into for coal.

After a short period of time as an isolationist country, Czar Garrett brought his nation and people into the fold of the NAAC. The nation grew swiftly, and important trade decisions were made in an attempt to increase the prosperity of Serine. However, that prosperity was hampered by the outbreak of the Second Arctic War between the NPO and NAAC. That war ended on June 3, 2006, and Serine looks to the future.

The Great War, which broke out in mid-July 2006 and directly involved the nation of Serine (via the NAAC and coaLUEtion), was not a significant hinderance to Serine. Serine continued to grow and prosper. 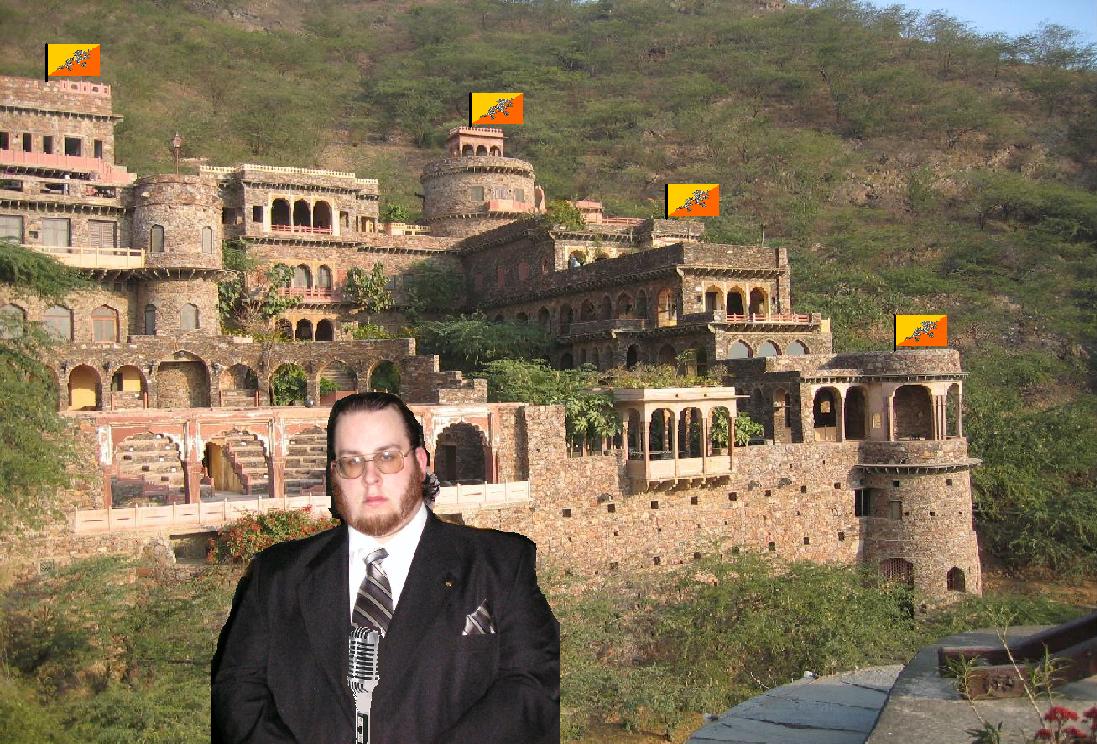 Czar Garrett about to give a speech outside the Imperial Palace

After the third Great War, with the Collapse of the NAAC, Serine became an independent nation for some time. After a while, Czar Garrett eventually brought his nation into the fold of the North Atlantic Defense Coalition (NADC).

The main exports of Serine are cattle and coal.

The beef cattle are a hybrid breed of Piedmontese and Maine Anjou, which makes for a well developed muscle structure and a low fat content. The dairy cows are a modified Holstein breed, whos milk contains roughly 1.5% less fat than standard dairy cows and produces an average volume of 7% over most other breeds.

The coal is mostly anthracite and while rare, the coal mines do occasionally find a diamond or two.

The Anthracian University has allowed Serine to gain international fame with its novel approached to biotechnology, especially with its efforts to map the human genome.

Moosehead Stadium plays host to the Anthracian Moose during the football season, and is available for concerts and other events throughout the year.

Serine is a fairly diverse and tolerant country when it comes to religions.

While the general trend of spirituality fluxes, there are a few constants

The Home Guard provides personal security for Czar Garrett and acts as a standard police force in Serine's territory.

The 1st Regiment is the main military force. Should Serine go to war, it is the 1st Regiment who takes to the front lines. They are well trained and loyal to the people of Serine.

The 2nd Regiment is comprised of more technically skills soldiers and contains the engineering corps.

As of June 2, the 1st Armored Regiment was founded.

October 23 was the date the Serine Air Force was established.

During the early days of existence, Serine was lucky enough to not suffer aggressions against it. However, this changed during the Third Great War, when a trio of NPO nations targeted Serine. Despite suffering in the upwards of 40,000 casualties, Serine did not surrender until such point when the NAAC itself dissolved.

Involvement in the Second Artic WarEdit

Serine, so far, has been lucky to not be heavily involved with the Second Artic War. Due to the youth of the nation, Serine was not intially targeted by NPO forces. However, after some time, a member of The Legion an alliance that was allied with the NPO did make several strikes against Serine, but eventually ended hostilities when The Legion called an armistice with the NAAC.

The official end of the Second Artic War came on June 3, 2006, with Serine suffering minimal attacks, and coming out of the war at its strongest point to date.

Involvement in the Great WarEdit

As a member of the NAAC, and thefore the coaLUEtion, Serine entered the Great War alongside its allies on July 17, 2006.

Making minimal attacks against NPO/NpO enemies, Serine suffered no attacks against the country. Working in concert with fellow NAACers, it seems as if the coaLUEtion was able to change the face and power structure of Cybernations.

Involvement in the Second Great WarEdit

When the NAAC became involved, Serine was dealing with internal matters, and did not involve itself in any great way.

Involvement in the Third Great WarEdit

When the The Initiative and the Aegis Forces went to war, Serine was involved quite quickly with the battles.

Three NPO nations attempted to grind Serine to ashes and dust, killing over forty thousand citizens. However, Serine never gave up, and only "surrendered" when the NAAC itself disbanded.

Retrieved from "https://cybernations.fandom.com/wiki/Serine?oldid=463850"
Community content is available under CC-BY-SA unless otherwise noted.