-Hurry and shut up-, said some sort of general of this new created army everyone talked about. Noone knew for sure about them. They never showed themselfes in public. Its just...Odd stuff was happening lately. Such thing wasnt happening in Serbia for a long time, and every real and patriotic Serb like it but was too afraid to believe thats true and they are not dreaming. All this started as a small thing. Some antiserb organisation activist were beaten up in downtown of Novi Sad. That was a real suprise.. Government was group of foreign traitors and was protecting those. This organisation of young, fearless man just showed up there before police and destroyed their little protest. Government did their best to cover this, but those things started to happen too often. Good and honest policemen quitted their jobs, and rumors say that they joined that organisation. Suddently, governemnt lost control in Novi Sad. Organisation declared themselfs as Serbian Flaming Fist. Their leader was Vojvoda Ivan. Almost everything in city was under their control. Only thing that was on their way, was ustasha Nenad Canak. He was baricaded in hes house with some remaining police forces, and refused to give up. Proud sodiars od SFF (Serbian Flaming Fist) was all over that damn house. They had nothing to lose as they already put their lives to serve mother Serbia. Vojvoda Ivan and his generals provided them with some old AK-47 from Africa, as only that countries wanted to help them. Yeah, its true Russia turned their back on Serbs once again in name of "democracy". Hour of attack was getting closer. Generals decided that best strategy is to rush attack them in 5:00 in morning because all of them was in fear. Fear of God, death and in fear of everything that was good. They know what they were.. Traitors - worst kind od men there is on earth. In 5:32 every last member of "Canak's Ustasa Army" was down or arrested. Canak tried to kill himself but was too afraid. SFF army found him in his chambers with pistol in his hand and shit in his pants. He was arrested too. As they took comletely control of Novi Sad, many Serbs wanted to join or help SFF. All western "democracy" countries was against SFF. But very soon all Serbia was united, traitors were hanging and peaople were happy as they never been. America and NATO decided to attack Serbia, but was too afraid and just bombed it for awhile. But people started to protest all over western europe and USA and bombing was stopped. Finaly... Serbia was free country. At first time, only trade agreements were made between Africa countries and Serbia. Later Asia countries agreed to trade... Soon, people voted that Serbian should be kingdom and Vojvoda Ivan has be declared for King. Some rules was brought to life once again. Many things from "Dusanov zakonik".

Some minor fractions refused to accept new King. But true was that they were too small and hated by the people to do anything to harm Serbian Flaming Fist. So, they contacted foreign country of Maxland and started negotiations about their assistance. Maxland ruler bobjoebob was greedy person, and so called Resistance in Serbia succeeded to persuade them to attack. New formed country of Serbian Flaming Fist was totally unsuspected of this threat. Government was still forming all branches of country and people were helping their King and country to recover industry, agriculture, culture… “Suddenly, evil troops of Maxland Army stepped over our country borders” says one legged veteran of SFF Army. “We were hugely outnumbered, and surrounded by them, and King Ivan was out of country on world tourney telling people about our great, new country. We managed to keep them on borders, and our Generals were quick to show up in front lines and to organize defending. We fought bravely and with Gods help succeed to take most of attacking force down. King Ivan returned, and saw dead and wounded soldiers all over country. Serbs all over the world heard about this event. Help from them just kept arriving. Thousands of trucks with medication, food, blankets and all other stuff were on their way to lands Serbian Flaming Fist. Large sums of money and Serb soldiers arrived from all over the world. King Ivan brought 100 000 soldiers with him and fearlessly attacked Maxland. Bobjoebob was panicking. Everyone knew that he was evil and noone wanted to help him. Soon, his country was in ashes.” “Last battle was the best” says another war buddy of one legged soldier, “We marched right into Maxland capital city. Only few Maxland soldiers were still willing to fight our glorious SFF Army. Everyone was arrested and killed in Maxland capital city downtown, and then whole country was set to fire. I enjoyed that part mostly” say apparently man with Vietnam syndrome. King Ivan pronounced VICTORY and 10 days of celebrating. He could afford that with money he looted from poor devastated Maxland. After that ugly experience, people of Serbian Flaming Fist started to work even harder to provide their country with money and defenses so something like that stupid loss of Serbian lives doesn’t happen again.

Kingdom of Serbian Flaming Fist is ruled by their beloved King Ivan. He has 100% power in country and all political parties are shut down and forbiden. King is very religious, and he expect same from his nation. This is official Kings family flag... 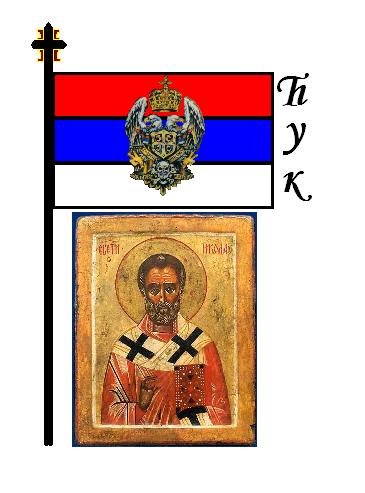 Serbian nation enjoy all civil rights as long as they respect laws and King. People that are not Serbs are citizens with lower rights, and can not owe any land in Serbia. Their only job can be workers at Serbs farms or factories.

Retrieved from "https://cybernations.fandom.com/wiki/Serbian_Flaming_Fist?oldid=463847"
Community content is available under CC-BY-SA unless otherwise noted.