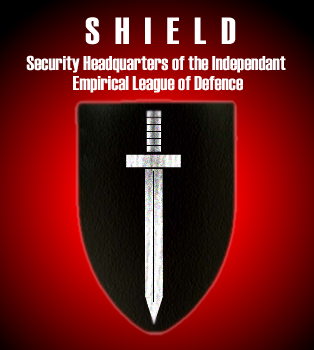 The Security Headquarters of the Independant Empirical League of Defence is a MDP bloc open to any alliance wishing to join. The only requirement be that all former signatories should be in agreement beforehand. In such a case the joining alliance shall add its own signatures to the bloc agreement and will adhere to the terms below, or be subject to expulsion from the bloc. SHIELD was conceptualised by UBD and WAR, and was formally signed with ISCO in November 2007. On the 5th of December '07 Senzai-Ishiki Menrui joined SHIELD. On the 12th of January '08 Prussia joined the bloc but 3 days later on the 15th on January was expelled because of unruly behaviour, slanderous comments to alliance leaders and destroying part of the SHIELD forums. Also on the 15th of January the ISCO resigned from SHIELD. Soon after the Prussian debacle the remaining alliances decided it was best to disband SHIELD in private. As of January 2008, this Bloc has been dissolved.

Our forums can be found here: SHIELD Forums
Our IRC channel is #shield at: Coldfront IRC

This bloc will be open to any alliance wishing to join. The only requirement be that all former signatories should be in agreement beforehand. In such a case the joining alliance shall add its own signatures to the bloc agreement and will adhere to the terms below, or be subject to expulsion from the bloc.

All signatories shall retain their sovereignty and shall not take any action, either directly or indirectly in any action that would threaten the sovereignty of another other signatory of this agreement

Each signatory of this pact are required to set up an embassy in each of the forums of the signatories.

Section A All signatories agree not to initiate any action which may hurt any other signatory. Military actions, sanctions, or any form of regular and irregular warfare (including espionage) are strictly forbidden against another signatory by this pact.

Section B Should a rogue nation within one of the alliances attack another alliance within the bloc, that nation will be subject to ZI. If the alliance that the nation was in does not agree with ZI they will be expelled from the bloc.

Section A If either of the signatory alliances is attacked by a third party, the other signatory is required to provide all military, financial and political assistance to his ally in order to achieve victory.

Section B If a signatory is under attack and refuses military assistance, all other signatories are not required to provide any form of aid although financial aid will still be encouraged.

Section A Any alliance who violates the terms of this agreement could be subject to attack from all other signatories of bloc for cowardice and not honouring the agreement.

Section B If the violating party is not attacked by others of the bloc, it is to be permanently banned from ever re-entering the bloc.

Section A During times of war (Defensive wars only) the largest alliance in the bloc shall take command in terms of military, politics and aiding. However the commanding alliance is required to work closely together with the smaller alliances within the bloc.

Section B Should the smaller alliances refuse any reasonable order in times of war, the alliance could be subject to expulsion from the bloc.

If any signatory wishes to withdraw from this treaty for any reason, they must inform the other signatories ninety-six hours in advance before legal termination. The pact will be upheld for these ninety-six hours, however in the case of a breach of any of the above Articles it is acceptable for the treaty to be terminated immediately if a diplomatic agreement is not made.

Security Headquarters of the Independant Empirical League of Defence
Retrieved from "https://cybernations.fandom.com/wiki/Security_Headquarters_of_the_Independant_Empirical_League_of_Defence?oldid=305112"
Community content is available under CC-BY-SA unless otherwise noted.