The Second ERA-CCCP War was a conflict between the Equal Rights Alliance and CCCP micro-alliances. It lasted from September 14 to September 28, 2010 when ERA declared peace after CCCP was declared under the protection of Nueva Vida. Shortly after its conclusion the GCU-ERA War began around October 3 when the Global Communist Union declared wars against the Equal Rights Alliance, presumably, in retaliation for their conflicts with the CCCP. ERA later disbanded, ending the second conflict.

00:28:52 RDT - the nation of Decrascopula from GOONS declares on United Soviet Nation. Peace is later declared, giving the appearance that this was an isolated incident.

19:59:40 RDT - CCCP's Ruski1917 declares that MasterofAnimals was the threat-maker, and that he had been ejected from the alliance. (He would go on to co-found the micro-alliance European Union)

14:18 RDT - Andover, leader of ERA, issues a statement saying that he will not end the war until CCCP agrees to pay reps.

15:09 RDT - Franz Ferdinand, leader of Team Rocket, issues a statement stating that CCCP currently hold Stalin's Ashes and that he would quite like them back if possible.

22:37 RDT - Andover issues a statement saying that Nueva Vida had stepped in to protect CCCP, and that Ruski1917 had vowed vengeance.

The criticism was scant at first due to the fact that CCCP effectively made the same mistake they'd made the first time with ERA. However, once Andover said that he planned on pursuing the war until reps were paid, the reception of this was largely negative. Reasons given included a general dislike of eternal war, GOONS having done the bulk of the damage, and disbelief at the expectations that such a small alliance could pay reparations. Even though no reps were requested in the end, Andover came under heavy fire for his "smug" comments regarding CCCP. 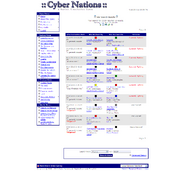 Retrieved from "https://cybernations.fandom.com/wiki/Second_ERA-CCCP_War?oldid=432061"
Community content is available under CC-BY-SA unless otherwise noted.