Bay Area is a small, developing, and young nation with citizens primarily of Chinese ethnicity whose religion is Islam. It is a backwards nation when it comes to technology and many refer to it unkindly as a 'Third World Nation'. Its citizens pay extremely high taxes and many despise their government as a result. The citizens of Bay Area work diligently to produce Sugar and Oil as tradable resources for their nation. It is a mostly neutral country when it comes to foreign affairs. It will usually only attack another nation if attacked first. When it comes to nuclear weapons Bay Area will not research or develop nuclear weapons. The military of Bay Area has been positioned at all border crossings and is arresting all drug traffickers. Bay Area does not allow any form of government protests. Its armed police forces work quickly at "dissolving" any and all government protests. It has an open border policy, but in order for immigrants to remain in the country they will have to become citizens first. Bay Area detains individuals who participate in slanderous comments about the government. The government gives foreign aid when it can, but looks to take care of its own people first. Bay Area will not make deals with another country that has a history of inhuman treatment of its citizens.

On July 5, 2011, short after he had created his nation, Ricky415frisco decided to apply to join the New Pacific Order. Gumpper, officiating as Professor of the Academy, started with his post the application procedure. After a very lively application process, including many questions both from the Academy staff as well as Ricky himself, Gumpper approved of the application on July 11, 2011. Afterwards, he attended to the Imperial Academy. In the Academy, he learned the ways of the Order as well as how to properly manage his nation and engage in war.

Although he has become a full member of Pacifica just a short while ago, Ricky calls a few Pacificans like Dany2j, Bobogoobo and Aleisyr his friends. Some influential people to Ricky are King Brandon, Brucemna and Caius Alexandrian.

There were many reasons behind the merger, the most prominent being increased efficiency by uniting the Bank and TC. The merger further opens up opportunities that weren't there previously by allowing younger nations to assist in banking duties. The primary responsibility of the Economic Affairs Department is to aid NPO members and allies as well as procuring technology for Pacifica.

Ricky joined Econ on July 14, 2011. His duty as an Econ Procurer is to send out Tech to his customers, older nations that pay for it.

Ricky fought for Pacifica during the Fark-NPO War. 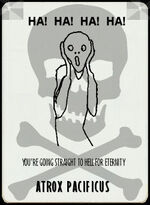 On July 16, 2011, Ricky joined the Beta Battalion branch of the Atrox Pacificus Squad, one of the oldest still existing squads within Pacifica, after he had read an advertisement for it by Walt Schmidt, leader of the original squad.

Retrieved from "https://cybernations.fandom.com/wiki/Ricky415frisco?oldid=499672"
Community content is available under CC-BY-SA unless otherwise noted.