The Federal Republic of Rhodesia Nyasaland (Afrikaans: Federale Republiek van Rhodesie Njassaland) is a small, developing, and young nation with citizens primarily of African ethnicity whose religion is Christianity. It is a backwards nation when it comes to technology and many refer to it unkindly as a 'Third World Nation'. Its citizens pay high taxes and constantly express grievances about their government and work environments. The citizens of Rhodesia Nyasaland work diligently to produce Water and Uranium as tradable resources for their nation. It is a mostly neutral country when it comes to foreign affairs. It will usually only attack another nation if attacked first. Rhodesia Nyasaland is currently researching nuclear technology for the use of nuclear power plants but believes nuclear weapons should be banned. Plans are on the way within Rhodesia Nyasaland to open new rehabilitation centers across the nation and educate its citizens of the dangers of drug use. Rhodesia Nyasaland does not allow any form of government protests. Its armed police forces work quickly at 'dissolving' any and all government protests. It has an open border policy, but in order for immigrants to remain in the country they will have to become citizens first. Free speech is considered taboo in Rhodesia Nyasaland. The government gives foreign aid when it can, but looks to take care of its own people first. The government of Rhodesia Nyasaland will trade with any other country regardless of ethical consequences.

The Federal Republic of Rhodesia Nyasaland is located in southern Africa. The country, with its capital in Livingstone, considers itself the de jure and de facto successor state to the former Republic of Rhodesia (12/03/09 - 03/16/2010) and Northern Rhodesia Protectorate of Transvaal. The country existed as a protectorate of the nation of Arctica and later the Union of South Africa (Atlantik Clique) since February 5, 2011.

On September 25, 2013, the territorial reform reorganized Rhodesia Nyasaland in 11 districts and 2 federal entities.

The politics of Rhodesia-Nyasaland takes place in a framework of a Parliamentary Federal Republic, whereby the State President is the Head of State and the Prime Minister is the Head of Government as organized by the 1969 constitution of the first Republic of Rhodesia. Executive power is exercised by the government. Legislative power is vested in both the government and the Federal Assembly.

Speakers of the Federal Assembly Edit

Flag and Coat of Arms Edit 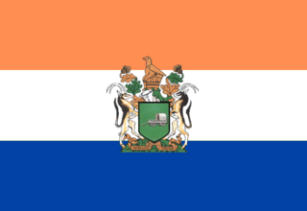 Coat of Arms of Rhodesia Nyasaland

Rise, O voices of Rhodesia,
God may we Thy bounty share.
Give us strength to face all danger,
And where challenge is, to dare.
Guide us, Lord, to wise decision,
Ever of Thy grace aware,
Oh, let our hearts beat bravely always
For this land within Thy care.

Rise, O voices of Rhodesia,
Bringing her your proud acclaim,
Grandly echoing through the mountains,
Rolling o'er the far flung plain.
Roaring in the mighty rivers,
Joining in one grand refrain,
Ascending to the sunlit heavens,
Telling of her honoured name.

The Rhodesian Security Forces are the Armed Forces of Rhodesia Nyasaland. They were established along with the Rhodesian Army on September 26, 2013, and have one active regiment in service, the 1st Rhodesian African Rifles. The regiment has a strenght of 1500 men, trained for patrol and defensive/offensive capabilities alike.

The Rhodesian Security Forces have never taken part to active fights, and their main tasks are border patrol and counter-insurgency.

September 26, 2013 - Rhodesia Nyasaland is officially marked on the CNRP World Map. Creation of the Rhodesian Security Forces. September 26 has been declared a national holiday as "National Armed Forces Day".

September 27, 2013 - The Livingstone International Airport undergoes a complete restoration. Air Rhodesia assumes the role as Rhodesia's national air company. On the same day, after a referendum on the toponym of Victoria-Lusaka, the district and the city are renamed "District of Victoria" and "City of Victoria".

September 29, 2013 - Rhodesia Nyasaland is officially admitted into Nordreich as Bürger and completes the construction of a harbor and the new building of the Ministry of Foreign Affairs. Iron and Pigs are replaced with Uranium and Water.

October 1, 2013 - As part of the "NUKED" program, Rhodesia Nyasaland receives 25.000.000 Pounds in foreign aid from the nations of UusRevala, Hana_, Neo Box, crack land and Benfica-Land. On the same day Rhodesia Nyasaland completes the construction of the Federal Aid Commission and 3 factories.

October 5, 2013 - After the collapse of the Atlantik Clique (Union of South Africa) and the take over by Kanteero (Athenian Federation), Minister of Foreign Affairs Pieter Van der Byl is dispatched to Kanteero to discuss Rhodesia Nyasaland's claim over Southern Rhodesia/Zimbabwe.

October 7, 2013 - Rhodesian Government collapses as Rhodesian Front loses majority in the Federal Assembly. Afrikaner National Party is now the dominant force in the parliament. State President Ian Smith appoints Hendrik Verwoerd as Prime Minister of Rhodesia Nyasaland. A National Constitution Committee is formed to register and compile all federal decrees in a unified Chart. The Flag, the Coat of Arms and the Motto of Rhodesia are changed.

October 8, 2013 - After a number of initiatives, meetings and demonstrations in support of afrikaner pride and rule, the General Secretary of Afrikaner Solidariteit announced that a sum of 9.000.000 Rhodesian Pounds has been collected and donated to the government of Rhodesia Nyasaland. Large part of the sum was collected by people formerly residing in Transvaal.

Retrieved from "https://cybernations.fandom.com/wiki/Rhodesia_Nyasaland?oldid=490035"
Community content is available under CC-BY-SA unless otherwise noted.