Rhodesia is a growing, developing, and new nation at 1 days old with citizens primarily of British ethnicity whose religion is Christianity. It is a backwards nation when it comes to technology and many refer to it unkindly as a 'Third World Nation'. Its citizens pay extremely high taxes and many despise their government as a result. The citizens of Rhodesia work diligently to produce Fish and Lead as tradable resources for their nation. It is a very passive country when it comes to foreign affairs and has no interests in war. When it comes to nuclear weapons Rhodesia will not research or develop nuclear weapons. The military of Rhodesia has been positioned at all border crossings and is arresting all drug traffickers. Rhodesia does not allow any form of government protests. Its armed police forces work quickly at "dissolving" any and all government protests. It has an open border policy, but in order for immigrants to remain in the country they will have to become citizens first. Rhodesia has no definite position on free speech. The government gives foreign aid when it can, but looks to take care of its own people first. The government of Rhodesia will trade with any other country regardless of ethical consequences.

Northern Rhodesia had made previous attempts at independence before the founding of the Republic of Rhodesia. A Neo-Franzharian state had at one point taken governance over the area but was later reabsorbed into Transvaal. Later, a nation known as the Seventh Reich also split from Transvaal, also being short lived. In recent days, a man known as General Rhodes began rallying Rhodesian nationalists in a more concentrated effort for sovereignty. After a conference in the old colonial capital of Livingstone on Victoria Falls, it was decided that Northern Rhodesia would petition Transvaal for independence as the Republic of Rhodesia. Transvaal would soon agree and the Republic of Rhodesia was born on December 2, 2009, with full recognition of sovereignty on December 3, 2009.

The Legislative Branch of the Republic of Rhodesia is composed of a unicameral legislature named the Senate, where political parties campaign against each other for the majority. The majority is currently held by the Rhodesian National Party, with the Rhodesian Conservative Party coming in second, albeit with considerably less seats. 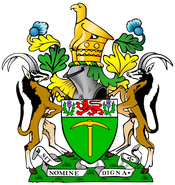 Coat of Arms
Add a photo to this gallery

Notable Businesses and Corporations in RhodesiaEdit

Source Manufacturing is based out of Lusaka, Rhodesia.

Southern Africa Luxury is a furnishings and decor company based out of Livingstone, Rhodesia. They manufacture hand-crafted furnishings including desks, chairs, wardrobes, sofas, tables, etc. In addition, they also produce many different types of decor, including mounts, fans, decorative pieces for tables and desks, clocks, wall decorations (such as posters, signs, paintings, etc.), clothing, and more.

Retrieved from "https://cybernations.fandom.com/wiki/Rhodesia?oldid=463378"
Community content is available under CC-BY-SA unless otherwise noted.