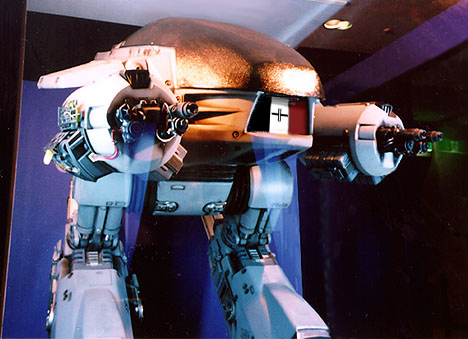 The Mechs of Deutschland.

The PZF has been under development for many years. Martens picked up the incomplete development of the previous government and assigned funding to the creation of this weapon, an improved German-made version of the failed OCP project known as ED-209.

The ED-209 was one of a kind, it was the first robot capable of moving in two legs without difficulty and with reasonable speed, while the weaponry was also adequate: A pair of arm-machineguns and added rockets of small caliber. It was however doomed to fail for a number of reasons...

The OCP did not intend it to be very good, it was intentionally created sloppily so it would break down often, then they would provide with spare parts and make a large amount of money out of it.

As much as the armor was satisfactory in most areas, in some areas it did not exist altogether. The frontal radiator, a number of exposed cables, underarmored joints, and even more structural errors.

The weaponry was mostly adequate, but not for a military use, other than soft targets.

The AI was very poorly done, and was in fact, glitchy. The ED became famous for falling down stairs, shooting people when it should not, and even getting a leg stuck in a manhole.

Also, it did not have a decent degree of energy autonomy and weaponry in store.

Once that the project was scrapped, years later, German Engineers picked up pictures and began to engineer it from scratch, hoping to turn the ED into what it should, and could have been: An efficient battle machine. With newer technology some of the old limitations were overcome, and with a different approach aiming to give top quality soon the ED would become the next breakthrough in the German Weaponry Tradition: The Panzer By Foot. The Panzer Zu Fuss I-B is the first of many attempts to produce a reliable improvement of the original concept.

Panzer Zu Fuss I Ausfuhrung A:

PzF IA looks from the outside almost exactly the same as ED209, however in the inside it works completely differently.

An AI was proved to not be viable, to overcome this the PzF actually houses one pilot within with the most modern computer interface, uplinked to the center of operations, with access to maps, and a lot more. All of the pilots undergo heavy training before handling one of these. The pilots are assisted by a very fast computer developed exclusively and separately with the Balance and the Aiming of the vehicle, Balance being the most vital function.

The pilot controls the movements, however the computer carries them out and also is on the scan for obstacles, traps, landmines, and just about anything which could bring the vehicle down. The PzF was tested in many different terrains hoping to cause it to topple and fall and it was even pushed, this was the most difficult phase in the development, but in the end it was worth it, as the vehicle is extremely stable in most circumstances, climates, and terrains. There is no chance for a human to outrun it, and it is able to go through and into places regular wheeled armored vehicles cannot reach.

The Firing control is linked to the pilot's arms, the PzF's arms will move accordingly. The computer also helps to correct aiming to certain degree, and it can zoom to help the pilot become a sniper, and quite easily. It is also able to pick a target and track it with several types of sensors and calculations.

The numerous weakspots in the armor, the joints, exposed circuitry, weak legs, and open radiator were fixed, plus the already existant armored was upgraded with the newest materials to protect the pilot from harm. This was also important, the old ED could be otherwise deactivated by a handgun or even a knife, now it is ready to withstand a reasonable amount of fire.

Should the computer fail, there is a manual mode which is able to override it to keep in operational status.

The power is given to the vehicle by both a high durability rechargeable electric battery of industrial power and also a very refined diesel engine, combined. The engine was another work group on its own, for the application of such engine is not ment to be only for the PzF. It is well protected, fine tuned. The greatest fear was the poor autonomy of operation in a vehicle like this, but thankfully the fear did not become a reality. The black panels on the frontal area are in fact solar cells to pick up further power for the Battery. The PzF can also take energy from a regular socket or from high voltage.

The weaponry of the IA consists of two machineguns attached to each of the arms, and also small rocket launchers just close to said guns. The machineguns have both a high caliber and a high muzzle velocity. They do not fire extremely quickly: Stronger, faster heavier bullets (Or small shells, so to say) were chosen in favor of using smaller caliber bullets which would only be effective against bare infantry. Given the necesities it can use armor piercing bullets or hollow tips for more damage on softer targets. The rate of fire also gives it dead-on accuracy for every single shot, and it in fact can snipe at enemies with the zoom from very far away. The guns also feature the Russian-made "blowback shifted pulse", like all the newer German firearms. The rockets can be (to some extent) guided by the pilot, can go straight forward, or can track a target (ideally). This is useful for firing around corners. Each arm cannon features one small rocket which has no charge, but has a cam which can be used to see what is hidden, or up ahead out of sight.

The pilot within also carries a standard military issue Glock pistol as well as other survival and survival oriented, normal equipment.

The Model IB is a version with even more firepower. It carries three mortar like structures which in fact fire rockets with better mobility than the regular ones, making it become even deadlier.There is also a mortar set onto the top and back, giving it even MORE firepower. The electric and fuel system are optimized even further.

Pz IC is similar to model IA, but improved. It has a bigger structure which enables for it to store more fuel and energy, for a better autonomy. The guns are also stronger - slightly larger, with more penetration - and the missile launching device has also been upgraded for better charge per rocket. It is the most balanced design.

IIA is a version which only shares the leg structure with the previous one, and it is designed to function specifically as an Anti Tank and Fort-buster. The computer systems are mostly the same, as is the pilot housing. It still has the mortar, but the big difference is in the arm weaponry. Instead of two cannons it features a pair of 75mm High muzzle velocity guns - While it would seem insignificant compared to the 120mm and longer cannon of the Leopard series, it should be remembered that this vehicle has TWO of the 75mm cannons, having then a much faster fire rate. The bigger cannons and the space for ammunition within them mean however that the vehicle is bulkier, slower. The effect of those cannons plus the dead-eye aim give it an advantage, it can hit more than twice on the exact same spot. 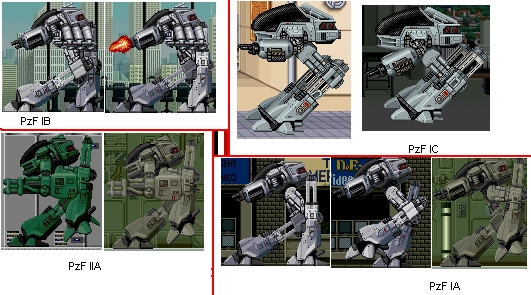 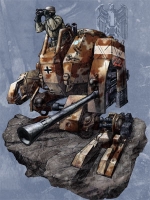 PzF IV is a model built from scratch, designed for versatility. It is able to move at nice speeds and it features a 100mm smoothbore gun onto the left "Arm" which has several types of ammunition: Antitank piercing shell, Fragmented shell, and Explosive shell, the latter two used most commonly for soft unarmored targets. Due to its designed it is easily the most agile vehicle in the reichswehr. Initially the right "Arm" as seen on the pic could be used to carry something, such as goods, but it has been now replaced with a MG45 machinegun to make it further useful against infantry and tanks alike. Some versions use FLAK instead, for AA purposes. 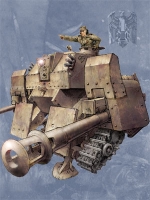 The Teufel is the latest mechanical wonder of the Reichswehr. Its role is thought out to be that of a low speed Infantry Support vehicle, as well as support for the Kaiserwagen. It is extremely well armored, and features dual 120mm cannons. Due to its low profile it is an excellent, deadly choice for ambushlike moves. There is a version which is in turn armed with FLAK versions of the cannons. To compliment its capacities it is also able to send a one-time-only barrage of rockets mounted onto the chasis, of high explosive, designed to counter infantry efforts.

Both the IV and V models make extensive use of the new generation of electronic guidance, aim, and detection systems.

The Panzer Zu Fuss has served well in many small conflicts in neighbouring nations, and proved its worth during the Second Great War, having established itself as one of the most important units of the battlefield together with the Panzer Leopard 2 Series. It has earned its place in history and the Reichswehr.

Videos of PzF in action:

Retrieved from "https://cybernations.fandom.com/wiki/Panzer_zu_fuss?oldid=24246"
Community content is available under CC-BY-SA unless otherwise noted.