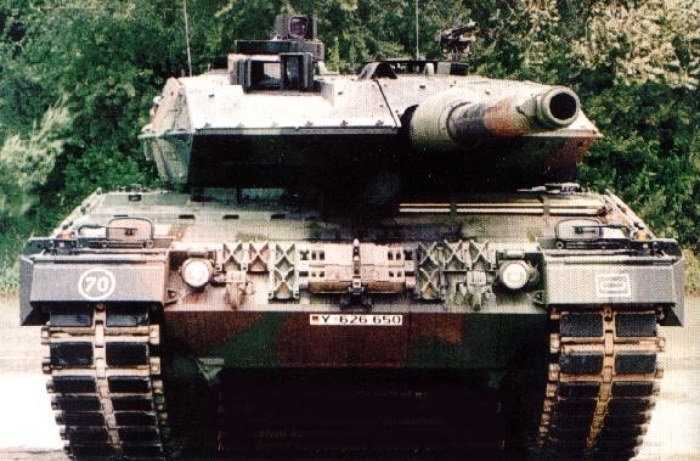 The Leopard 2 are the Main Battle Tank of the Reichswehr, and are manufactured massively for all sorts of battle purposes, they're also recognized as the best Tank in the world, and the main muscle of Deutschland

The variants used in the Reichswehr are further enhancements after the Leopard 2 A6, now standarized to A8. The improvements are as follows.

Cannon upgraded to 150mm for improved damage and range. Engine slightly tweaked for better performance. Non Explosive Reactive Armor Blocks added. Nitro boost added to the Engine. (This is done in all Medium and Light tanks) Computer systems upgraded. Uplinked to sattelite network. Armor Skirt to the sides of the vehicle added. 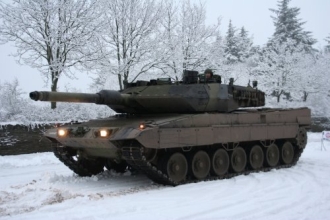 Like the Baedal Hyeonmu-1, it features its trademark Dynamic Suspension System:

The tank can "sit" and "stand", as well as "kneel", through the usage of its extensive suspension system that allows each of the road wheels, or "bogies", to be adjusted in height. "Sitting" gives the tank lower profile and offer better handling over roads. "Standing" allows the tank to have better maneuverability over rough terrain. "Kneeling" increases the amount of angle that the tank's gun barrel can elevate and depress, which allows the tank to fire its main gun downhill--something that very few tanks, if there are any others at all, can do--and give it better ability to engage low-flying aircraft. Mobility allows them to climb slopes as steep as 60 degrees. 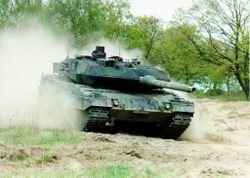 Retrieved from "https://cybernations.fandom.com/wiki/Panzer_Leopard?oldid=23414"
Community content is available under CC-BY-SA unless otherwise noted.