We, the alliances of Pandora's Box (hereafter "the bloc or PB") come together in order to foster unity and prosperity through peace, respect, and friendship. To that end, the individual alliances within PB retain our sovereign rights, and agree not to engage in warfare or espionage against one another.

Any information one signatory obtains that could impact another alliance within the bloc must be shared with the group in a timely manner. Information of this type is not to be shared outside of the bloc without unanimous consent.

To help spread friendship and peace, each alliance agrees to provide political and financial aid to other signatories as needed. Alliances will refrain from aiding any nation engaged in a state of war against another signatory.

Pandora's Box will be led by a council comprised of the top government officials of each signatory. Each alliance may determine who and how many (up to three) will represent them. Each council member may submit an amendment of this document to the council to be voted upon. Each alliance will only have one vote, regardless of number of representatives, which must be cast within 48 hours. Votes not cast within this time-frame are considered nulled. It is the duty of the member requesting a change to inform other council members of the request. Each vote must pass with 66% in favor in order for a change to be made.

Each signatory which has outside treaties agrees that those treaties will not chain to PB, and that PB will not chain to any outside treaty. Should a signatory find itself obligated to act because of an outside treaty, a vote will take place determining PB's course of action. The window for voting concerning war is 24 hours. Votes not cast within this time-frame are considered nulled. Should the vote pass with 66% in favor, defense becomes mandatory for each signatory. Should the vote fail with less than 66% in favor, defense becomes voluntary for each signatory. Offense is always voluntary and a vote is not required.

Removal of a signatory can only be done by a special vote by all other current signatories. The results of the vote must be unanimous in favor of removing said signatory. The window for this vote is 48 hours.

Any signatory may withdraw from Pandora's Box at any time for any reason. Upon withdrawal there will be a 72 hour period of non-aggression between the withdrawing alliance and the bloc.

Signed for the Viridian Entente, 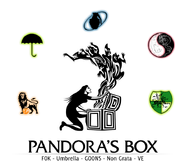