The Nuclear Proliferation League (NPL) is a quickly-developing alliance on the Aqua sphere. It was founded on the 27 May 2011 and was originally protected by the Farkistan and Guru Order alliances.

Members of the NPL are Cyber Nations specialist experts at developing and assisting new nations to Nuclear Armament and NPL is also the home of many experienced veterans who migrate to her uranium-rich halls. New applicants may join the NPL by simply filling out a new member application form on the NPL Forums and by clicking the Request to Join Alliance tab in game.

The NPL has fought in the following major wars:

The Nuclear Proliferation League is a group of nations that have gathered with the goals of achieving nuclear capabilities. Our foundations are brotherhood and Loyalty.

Being an active member is required by alliance policy. To be considered active you must check the alliance forums, and one's nation at least once a week. If one has a planned absence, a public announcement on the forums must be made and then one will be considered excused. The major guiding rule here though, is RL > CN.

Any Ruler may request admittance into the NPL by meeting the following requirements.

Article I. The Prime MinisterEdit

The Prime Minister may be removed from office by a unanimous decision by the Triumvirate.

The Triumvir's, on an individual level have the authority to appoint members to areas they are overseeing, run any departments they are advising and expel members and make emergency decisions, at their discretion. A Triumvir, upon resignation, must select a replacement and have it ratified by the Prime Minister. A Triumvir may be removed from office via a 3/3 vote from the remainder of the Triumvirate and the Prime Minister.

The Warheads are the administrative body of the alliance and oversee the following departments:

Specific duties are set by the Triumvirate.

A Warhead will always be considered a candidate for High Government upon their ascension to the rank of Warhead. A Warhead shall be allowed to appoint Deputies to assist in his or her duties, subject to approval by High Government.

Tech raiding is defined as any attack on an unalign nation for the benefit of the attacker or the attacker's alliance. Unaligned is defined as being on the NONE AA, or on an unprotected AA of 7 or less members. Members of the NPL may tech raid by requesting a target from NPL Government or other authorized officials. NPL Members who attack aligned nations are automatically considered to have their membership revoked, unless a state of war exists between NPL and the defending alliance, or there is a specific exception made by NPL Government. Breaking any other regulations set out by NPL Government can lead to expulsion and possibly forcible removal from the Alliance Affiliation. Signed: 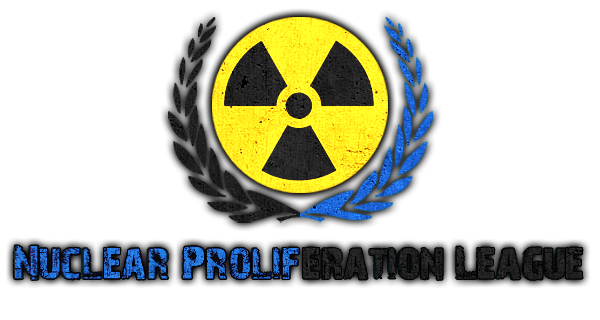 Retrieved from "https://cybernations.fandom.com/wiki/Nuclear_Proliferation_League?oldid=504033"
Community content is available under CC-BY-SA unless otherwise noted.