New Athens is the largest city (by population and size) and capital of Templuria. It is the birthplace of many Templurian presidents. It is the national center of business, finance, fashion, medicine, entertainment, media and culture in Templuria and is recognized around the world for it's fantastic monuments, historical landmarks, and clean environment.

During a period of mass genocide and civil war in Greece, refugees from around the country swarmed to rural areas. A small town was founded by local farmers. This town would one day become New Athens.

The government of Templuria is based in New Athens and many government buildings are located in the city. The government takes much pride in it's majestic structures. 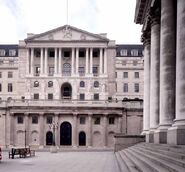 The High Court of Templuria.

The private manor of the president.

The East and West NPO headquaters in New Athens.

The Templurian House of Foreign Affairs.

The Magistrative House, where the president and his advisors meet.
Add a photo to this gallery

The New Athens Party is the main political party in Templuria. It is named for it's headquarters in the city of New Athens. The party was the first in existance and created the base of Templurian Politics. It was founded by Magnum T. Gundraw of the Gundraw Dynasty.

Retrieved from "https://cybernations.fandom.com/wiki/New_Athens?oldid=504006"
Community content is available under CC-BY-SA unless otherwise noted.