The Mighty Armed States of Honor, or M*A*S*H, was a Purple team alliance.

The Mighty Armed States of Honor Government is based on a Military Command Structure with some forms of democracy in its structure. General member's opinions are highly valued by the leadership of M*A*S*H. The government takes a very lenient policy when it comes to individual states affairs, as a result most members have more flexibility then though would in other alliances of similar nature. M*A*S*H government strongly encourages a policy of Strategic Deterrence towards outside threats, while keeping a rather neutral low profile in the political arena. The government of M*A*S*H is known to be a progressive government that will stand by its initial beliefs even if it is unpopular.

The ranks of the Mighty Armed States of Honor are based loosely on the American Army rank system.

War is Our Business, Peace is Our Profession.

The Mighty Armed States of Honor was founded on June 27, 2007 by Col. Fitswilliam, Flonker, and McClaren. M*A*S*H's early membership base was mostly Ex -ONOS memebrs who left after the NPO-ONOS War and did not agree with the new government installed by the NPO Viceroyalty. M*A*S*H would keep close ties to ONOS after the war and even on through its later versions of CORE and The Dominion.

M*A*S*H made significant growth over the first few months and joined The Offspring Alliances. M*A*S*H also signed a few other treaty's with such significant alliances such as CSN. The Relationship with The Offspring Alliances did not last long as the Bloc was ripped apart dues to a dispute between NATO and one of the signatories causing man alliances to leave. It was during this time that IAFC a fellow Offspring member merged into M*A*S*H.

Unjust War and Changing of Sphere[]

A month or so later M*A*S*H signed a Protectorate with The Legion on the eve of the Unjust War. M*A*S*H would go on to fight alongside The Legion and ~ allies during the war, by declaring war on SPAM and defeating them in a week. After the war M*A*S*H continued to grow and merged with NRGW. In late November M*A*S*H moved to newer forums to cope with the influx in members. M*A*S*H also switched to the Brown Sphere during at this time from the Green Sphere, do to increased competition on Green.

Late December 7 M*A*S*H experienced an influx in nuclear rogues and membership issues. The issues finally straightened out after January 2008. In February 2008 Flonker took over as Commanding Officer of M*A*S*H from Col. Fitswilliam who was stepping down after real life issues. Flonker instituted a many new programs, M*A*S*H internal strength swelled along with its Nuke count. It also was a time of signing of many treaties and reaffirming old ties of friendship. This period is known as the Spring Rebirth.

In Mid April relations on Brown became strained between the UPS v2.0 signatories and GATO, M*A*S*H also got tangled into the Mess that was the BDC-BC War through their relations to the Browncoats. M*A*S*H left Brown around this time roughly during the period of GATO-1V War, many of the brown team alliances did not sit on good terms with GATO over Senate issues, and treatment of smaller allies. This kept them from joining in defending GATO.

In late May the TAA merged with M*A*S*H. Flonker handed over command to Col. Fitswilliam once again due to real life issues. M*A*S*H experienced a wealth of growth in June 2008 and topped the 2 million barrier and 150 members. They also joined the Purple Sphere and Unity treaty called PEACE M*A*S*H would go on to be a top 36 alliances by July 2008. M*A*S*H also took on its own Protectorate's of its own, and conducted war drills with PLUS

In late August 2008 M*A*S*H got involved in War of the Coalition it was called on by its Purple brothers and sisters to defend their homeland. M*A*S*H fought against HPS for a total of 2 days and anarchied half the members of HPS. M*A*S*H was also a leading party in the Universalis-Legion War by declaring on Universalis after they nuked The Legion.

Loss of old friends, gaining of new ones. The early part of 2009 was a time of Economic and Foreign Relations building for M*A*S*H, but also the loss of several original members to inactivity script or other reasons affected M*A*S*H. It was also heavily committed to the Karma War (April 20—July 19, 2009) on the Karma side fighting against GGA. This was revealed after a controversial post on the OWF, made by Col. Fitswilliam against the Hegemony. M*A*S*H would also initiate several 100 Million dollar plus aid drives for it members and allies. On June 28, 2009 M*A*S*H celebrated its 2nd Birthday, and revamped its awards system. M*A*S*H held the Valenti Conference on Government in August 2009 to address several issues about M*A*S*H Government (mainly activity, government structure, and constructional issues). M*A*S*H played a role in diffusing the Knights of Ni! War after it was brought to light that the treaty between Knights of Ni and M*A*S*H was still active, although not known to M*A*S*H because of a filing mistake. M*A*S*H has about 3 million NS and 98 members as of June 10, 2010.

M*A*S*H experienced its first defeat in war during 2010. This was due to indecisive war orders and poor planning by the war department led by Countbaron. Supreme 142 and Dran led peace negotiations to stop the attacks by Asgaard, Umbrella, and Sparta. M*A*S*H did however manage to hold out for several days against overwhelming odds. Afterward s, M*A*S*H's economic officer Iburnmycd lost a vote to Executive Officer and eventually destroyed the forums leading to a severe state of inactivity within M*A*S*H. This called for a removal of several government members and a change to an Imperialistic theme followed to a change to the Commanding Officer Structure once more. 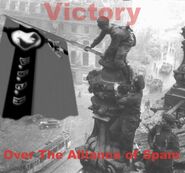 Propaganda from the end of the Unjust War

Propaganda from the end of the Unjust War 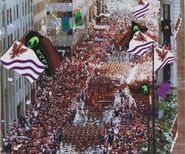