MaskofBlue was a member of the New Pacific Order, joining in December 28, 2007. She had spent several months in the Organization of Imperial Nations and the New Polar Order before settling into the NPO. It was what MaskofBlue terms the 'proper leadership which drew her to the NPO' along with the great sense of community.

MaskofBlue started her career as an ambassador but decided to leave so that she could fully dedicate herself to the Media Corps, starting off as a scribe and graphic artist, but working her way up to Senior Correspondent and Graphics Officer. She enjoyed being a Senior Correspondent in the media corps best, as it allowed her to open up her imagination freely and write about the goings-on in CN and the day to day operations of the Order. She also helped others in their writing and in running projects. Her dedication was astonishing; she loved being tucked away in the back doing her writing or graphics for the Order, spending around 8 hours a day, sometimes upwards of 12.

MaskofBlue believes that "letting go and giving up are not the same thing. People do not own or control you, they can influence or suggest something but in the end the decision is yours and you better be willing to live with the consequences". This philosophy served her well.

A touch of the divine bovine 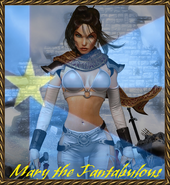 A creation for Mary the Fantabulous

An invitation to the Royal Pacifican Ball
Add a photo to this gallery
Retrieved from "https://cybernations.fandom.com/wiki/MaskofBlue?oldid=465283"
Community content is available under CC-BY-SA unless otherwise noted.