Koona has had several nations during his time playing Cyber Nations. Koona's first nation was created on January 26, 2006, and was the longest-serving NPO nation still active on Planet Bob until it was deleted during the Karma War. Koona was one of the first leaders to make his home on Planet Bob, and the third member to join the CN New Pacific Order. He was also active in the New Pacific Order on NationStates. Since he joined the NPO on Planet Bob, he tirelessly served the Order and his fellow Pacificans. He retired from active service in September 2009, but continued to share his wisdom and experience as an advisor to the Emperor, Cortath, and the Imperial Officers of the New Pacific Order. He has since resigned from CN entirely. 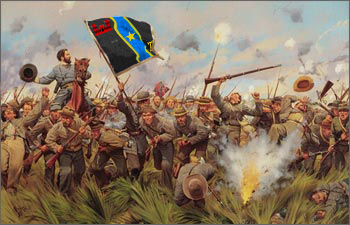 Koona has had a long and distinguished career serving the Order. As a member of the New Pacific Order from the very beginning, he played an integral part in building the New Pacific Order into the great alliance it is today. He has held numerous positions during the past 4 years. He was one of the first Councillors to be elected to the Council Pacifica after its creation; he served as an Inquisitor (internal affairs) from January 30, 2007 to February 25, 2007; as an Internal Affairs Imperial Officer from February 25, 2007 to October 24, 2007; as the Military Affairs IO from October 24, 2007 to April 7, 2009, and as Imperial Councilor from April 7, 2009 to September 29, 2009.

His list of accomplishments in these positions is immense, and his contributions to the Order cannot be overstated. For example, he was the first to propose the Recruiting Corps, and he also came up with the highly efficient NPO battalion system. After being appointed Commandant of the Imperial Academy by Dilber, he fundamentally retooled it together with noob5 — and the Academy retains his new structure and procedures to this day. He also worked closely with Philosopher, setting up the great reformation of the Order with Pacifica Mark II. As Imperial Officer of Internal Affairs, he set up and oversaw numerous departments and nurtured budding talents within the Order. When made an Administrator of the off-site forum, he completely revamped the forums, introducing and coding numerous additions that were later borrowed by numerous alliances - not to mention the idea and coding of resource display on forum (which are also featured on the CN) boards. He is also the creator of the New Pacific Order's CyberNations flag, and started the trend of NPO flag based avatars. Finally, in mid 2009, after internal unrest within the Military Command of the NPO, he took over the military operations and sought, in conjunction with Umbrae Noctem, to return the military to its original role as the central focus of the Order. The reorganization of Pacifica's military command is Koona's most memorable moment during his membership in the NPO. Thanks to Koona and Umbrae Noctem, the Pacific War Machine was back on track having been made better than ever - the feeling was of mission accomplished.

Having been lead Administrator of the off-site forums for over a year, Koona had the privilege to witness every aspect of the Order's unceasing growth and evolution. He is consistently amazed by the tenacity and initiative shown by countless members of Pacifica. Amongst the multitude of dedicated members the Order has, Koona stands as a shining example of ardent loyalty and tireless innovation. He hopes to continue to serve the Order and help keep Pacifica strong.

During his time as a Pacifican, Koona has met several people he admires and respects greatly. One of these people is Philosopher, as Koona worked very closely with him on designing a new alliance system that was put into practice with Pacifica Mark II, with the change of the charter, and the definition of the various departments and IOs. TrotskysRevenge is a close personal friend of Koona's, and they know each other from even before the New Pacific Order on NS. Finally, Vladimir introduced and taught Koona about Pacifica, and what it meant to be a Pacifican.

Note: Koona held additional positions which lack official dog tags. These include Commandant of the Imperial Academy and Inquisitor — the latter an internal affairs position.

Retrieved from "https://cybernations.fandom.com/wiki/Koona?oldid=500949"
Community content is available under CC-BY-SA unless otherwise noted.