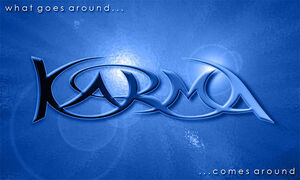 Karma was an unofficial coalition of 103 alliances, making it the biggest war coalition in the history of CyberNations. The Karma Coalition was loosely formed on the premise of the Karma War as alliances declared war on the New Pacific Order and other alliances from The Hegemony, thus making them a group fighting against the same alliance. The Hegemony is a loose term referring to those alliances supporting, allied or somehow related to the New Pacific Order, thus making them a group of a power sphere. The Karma war began when the New Pacific Order claimed that a minor alliance, Ordo Verde, accepted confidential information from an unknown third party. According to popular belief the New Pacific Order declared war in the midst of unfinished negotiations with Ordo Verde that included government officials from their treaty partner, the Viridian Entente, as a substitute.

TheNeverender, better known as Archon, the King of Mushroom Kingdom, was the initial figurehead of the Karma Coalition. He made his entrance in a letter addressed to the citizens of Planet Bob.

A third front figure in the Karma Coalition is Londo Mollari from Athens who was selected to present the New Pacific Order with terms. Though the terms were not officially released as they were declined, Emperor TrotskysRevenge, also known as Moo Cows, published some of the terms to discuss them publicly during an Imperial Decree, wherein he rescinded the Moldavi Doctrine and modified the Revenge Doctrine, and finally apologized to old Global Alliance Treaty Organization members.

Sanctioned Alliances (before start of war) by score Edit

Unsanctioned inside Top 40 By score (before war) Edit

Alliances ranked from 41-60 by score (before War) Edit

All Other Alliances involved in Karma, Not ranked by anything Edit

Retrieved from "https://cybernations.fandom.com/wiki/Karma?oldid=507502"
Community content is available under CC-BY-SA unless otherwise noted.