The Imperial Observer is a daily newspaper publication in Berlin, which is circulated nationally across Großgermania. Owned by the Imperial Government of Großgermania, it is published in both German (as Kaiserlichen Beobachter) and English.

Following the reunification of Germany in 1990, the readership of Neues Deutschland decreased sharply. Maintaining a socialist viewpoint throughout the years of German capitalism, the newspaper became the official newspaper of the German National Unionist Party (DNUP) when it was formed by the merger of the SED with the National Democratic Party of Germany. When the DNUP united with its satellite parties to form the National Unionist Party of Greater Germania (NUPG), it became the newspaper of that party. Renamed Kaiserlichen Beobachter upon the creation of Großgermania, the newspaper immediately began publishing an English version in order to help promote the unification process worldwide.

As the most widely-distributed and largest newspaper by content in the People's Empire, the Observer gains a daily circulation of over seven and a half million, mostly throughout Germany, Luxembourg, Liechtenstein, and Helvetica.

The following is a gallery of front pages of the Imperial Observer. 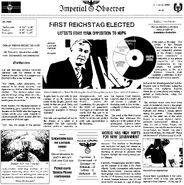 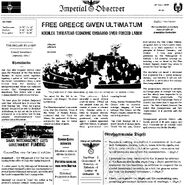 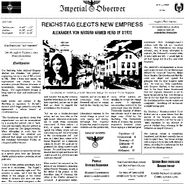 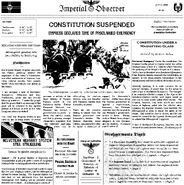 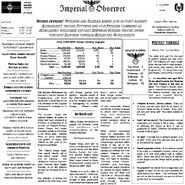 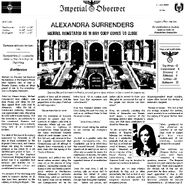 7 June 2009
Add a photo to this gallery
Retrieved from "https://cybernations.fandom.com/wiki/Imperial_Observer?oldid=477827"
Community content is available under CC-BY-SA unless otherwise noted.