The Great Charter of The House of Lords[]

This document, henceforth known as The Great Charter of The House of Lords, covers information on the establishment, rights and membership of The House of Lords and that combined with the documents entitled Statement on Elections and Legislative Processes, Appointment of Noble Rank and Honour and Missive on the Conduct of War forms the body of work by which the House shall be governed.

Establishment of The House of Lords[]

Let it be known that I, Aurdal of Aurdalia; that I, Lord Vorak of Vorakia; that I, Lord DE of Svitjod; that I, Lord Telcontar of TelcontarConfederacy; that I, Grossenschwamm of Urwaldland; that I, Wobbler of Terra Ninjo; that I, Silvara of Ys; that I, Baldrug of Infected Faction; that I, DarkUnderlord of Iboloral and that I, mathboy of Math Country; listed above in order of Nation birth, do hereby establish The House of Lords and verily do spam these forums with our announcements as deemed necessary, appropriate and according to our whims. Furthermore, let it be known that The House of Lords functions under such construct and rule of law as follows forthwith.

Appointment of The First Governing Body and Assumption of Noble Rank[]

Let it be known that from henceforth, and until such time as their resignation or other change of status, the founding Members of the House assume the following position, rank and honour:

Note that all titles are in the style of His or Her [Diplomatic Honour] The [Military Honour] [Name], [Official Position(s) (if such is held)], [Noble Rank] of The House of Lords, [Self-Appointed Title] of [Nation].

Flag of The House[]

Let us present to the community, the Official Flag of the House (shown here with additional white border for the purposes of definition). 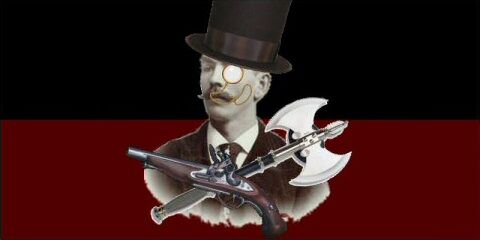 The Flag of the House contains the following aspects:

Â¹Chief Wanamatatingu later led an uprising of native people's which burnt the First Great Palace to the ground. His Axe was found embedded in the head of The Marquis De'Ville.

Declaration of Intents and Matters Pertaining to Haughtiness[]

Membership is open to all Rulers be they men, women or other, including eunuchs who shall be highly prized for their lack of testes and girly-man singing voices.

As such, any Ruler of a Nation, if they should so desire, may request Membership of The House of Lords, by making such statement in The Great Hall and including in that statement, the following details:

Once a request for Membership has been made, and failing any objection from an existing Member of the House, and barring such incidents or lack of honour which may otherwise cause concern, the applicant shall be granted Membership of the House. It is the duty of the High Commissioner, or a named representative thereof, to grant Membership to the applicant.

If, for any reason, any existing Member of the House objects to Membership being granted to the applicant, they must make such known in the Legislative Assembly via a Motion of Objection to Membership, either before or within 30 days of the Member being accepted. At such time, it is the duty of the High Commissioner, or their representative, to inform the applicant that there has been an objection. Should the Motion be accepted and pass, the applicant shall be denied Membership or, if having already been accepted, have their Membership and all privileges granted therein revoked.

Obligations Upon Members of the House[]

Once accepted into The House of Lords, it is the duty of all Members to:

Once accepted, Members shall have a State Room constructed under Sovereignty House, within the Official Forums of the House, for the purpose of keeping such records for their Nation as they should so deem fit. Furthermore, all Members shall be granted acceptance from their peers and be known to have the full and complete rights of a Member of the House.

The Power and Authority of the House[]

The House shall, subject to this Charter, have power to make laws for the peace, order, and good government of the House with respect to:

On all other matters, the House may undertake such action as to advise or assist Members as deemed appropriate, but it must be known that such action is not obligatory, nor is any Member required to accept such action undertaken by the House, or follow any requests made of them with regard to such matters.

The Sovereign Rights of Our Members[]

Members of the House, as Sovereign Rulers of their own Nation, will continue to explicitly hold all those rights as outlined below. While the House is duty bound to provide advice and assistance with relation to these matters, Members are free to ignore such advice if they should so choose.

All Members of the House retain the right to:

Statement on the Integrity of Member's Rights[]

Any Member who should so abuse their rights as to bring offence or dishonour to the House, may be brought before a Judicial Committee for trial and if found guilty, punishment, or have a Motion of Dismissal moved against them. While the House acknowledges the Sovereign Rights of its Members, it advises that certain acts may cause other Members of the House to move a Motion of Dismissal against any Member, who is deemed to not uphold the values, integrity or purpose of the House.

By way of explanation, Members retain the right to free speech with others, as they deem appropriate, and provided that they do not speak on behalf of the House without authorisation to do so. However, if such speech causes embarrassment or disgrace to the House, the Member and Ruler of that Nation may be removed from the House, if a Motion of Dismissal is successfully passed against their person or a Judicial Committee so orders. Likewise, Members retain the right to trade with those Nations as they deem fit. However, knowingly trading with a Nation in disrepute may be cause for a Motion of Dismissal, or other disciplinary action being moved against such a Member.

On the Principle of Quid Pro Quo[]

Members of the House that do for others, shall expect others to do for them. Likewise, Members of the House who, by their sovereign right, refuse to aid others, may find that such aid is not offered to them in their time of need. Furthermore, any Member who would refuse to provide aid, arms, advice or other assistance when able to and directly requested to do so by another Member of the House, is not protected from a Motion of Dismissal being brought against their person which, if successful, will result in them being stripped of their status and their Membership revoked.

For clarity in the interpretation of this document, the following definitions are supplied:

This document, which may be cited as "The Great Charter of The House of Lords", was passed into law on this, the 30th day of March, 2007 but shall be deemed to have taken effect on and after, the 31st day of January, 2007.

His Eminence The Right Venerable DarkUnderlord,
Lord President and Leader of the House,
1st Duke of The House of Lords,
President of Iboloral.

History of the House of Lords[]

The History of the House of Lords (It's a work in progress, updates will come frequently)

To begin to understand how the House of Lords were founded, we have to go back to the very roots of where we came from. And it all started with one Norwegian, named Aurelius. He found a game called "CyberNation" which a browserbased political and economical simulation game. He jumps at it and invites his good old Friend Vorak, whom he know from the Troika based fansite www.terrra-arcanum.com. They try hard to raise the interest there to create a new alliance in this game. This they fail with, and they found thereself taking a liking of the Grey Council and were admitted membership. Later on, those that followed from Terra-Arcanum would follow in their footsteps and also apply for membership in the Grey Council.

Then came the Black September. A Mass exodus where practivally the whole governing body of the Grey Council left and founded The Order of the Black Rose. In the turbulence that followed Vorak came to play a prominent position and was later elected chairman. The damage that had been done were great, but the Grey Council managed to survive. Then came there a point when one of the members just couldn't stay. DarkUnderlord came into a dispute with most of the members of the Grey Council and left. At first, he applied for membership in the Order of the Black Rose but he cancelled his application before getting an approval. An idea had taken hold of him. He started to talk with his old friend Vorak, whom knew each other well. An alliance of their own. This was the year of 2007, late February. the rounded up their fellow comrades that shared the same origin as they did, and so was The House of Lords founded.

We were all eager, and the House grew in numbers. With DarkunderLord as Lord President and Vorak as Prime minister, the House of Lords took it's shape and was formed into what it is today. A year later it was yet again time to rejoive, as the United Sovereign States, another faction that had split up from the Grey Council, merged into the House of Lords. We rapidly increased in size and got to see the faces of old friends yet again. Ever since then its been skirmishes, diplomacy and recruiting all the usual business an alliance goes through really. Our roots are almost entirely unique since the Grey Council was a union of idealists, the goal we all had was to create an alliance that truly went beyond the scope of what Admin thought an alliance could be. The problem ended up that an alliance full of political free thinkers ended up splitting into factions like that sort of thing always does and the factions destroyed the purity of the GC's goal. In the end these factions left and formed their own alliances (including us) because what we tried to do was really just to complicated for the Cyberverse.

In May 2008 Vorak decided the he needed a vacation and Silvara was elected Prime minister in May 16, 2008.

In January 2009 the Lord President DarkUnderlord decided to resign from the position in order enjoy what retirement had to offer in the form of Cigarrs, Whisky and Wenches. He later decided to leave this world and dispearsed into the skies as a cloud of ancient class.

In May 15 the Alliance suffered yet another great lose when the Sitting Prime Minister Silvara and the Lord Magistrate Aurelius took there leave from Planet Bob once and for all. Acting on this the Lord President Vorak immeadetily appointed Silvio Arjunza as Temporary Prime minister and made clear the Osiris took over as Lord Magistrate after Aurelius.

Silvara had at this point been Prime Minister for 2 years to the day and Aurelius had been Lord Magistrate since the position came to the 8th of October 2009.