Despite its official stance as a left-wing party, it had attracted environmentalists throughout the political spectrum, and was often considered as a "politically-neutral party". During its run, it was only a minor party in terms of seats held, but often had some influence in government policy as it sometimes held the balance of power. It dissolved itself after the fall of Disparu, after its members disagreed on what path the party should take. Its former members can be found on all five existing parties.

Prior to its dissolution, the GPD held holds 40 seats in the Commons, 19 seats in the Senate, and one seat in the Executive Council. 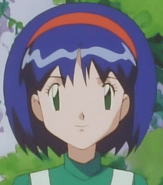 Erika Gardenia, former leader of the GPD
Add a photo to this gallery
Retrieved from "https://cybernations.fandom.com/wiki/Green_Party_of_Disparu?oldid=477849"
Community content is available under CC-BY-SA unless otherwise noted.