GodKing I's nation, The Empire of GodKing I, was a gift from the Heavens. Her purpose: to prosper. For the good of ALL citizens, certain freedoms may be curtailed, however, all are necessary for the peaceful and orderly society the Empire is so richly entitled to.

"By Any Means Necessary!" is the rally cry of her armies. The souls of Heroes fallen in defense of Her Realm are welcomed into the Halls of Devlyn, an ethereal place where the dead are celebrated with wine and song. The Empire stands proud as a member of the New Pacific Order, and will defend all Pacifica stands for. The Army of GodKing I is willing to send many more of Her Heroes into the Halls of Devlyn for the New Pacific Order.

From his throne in the capital of Devlynopolis, Emperor GodKing I works tirelessly into the night to ensure that the borders of His realm are protected and that His citizens are productive and useful members of society. "For the Good of the People!" is Emperor GodKing I's hallmark response and the very reason The Empire of GodKing I will rise and overcome any and all opposition. 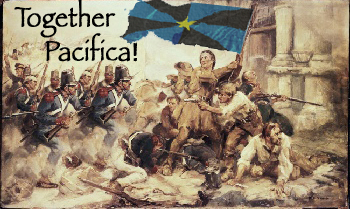 GodKing I joined the New Pacific Order on January 27, 2008, shortly after the founding of his nation on January 20 of the same year. GodKing I felt that he had much to offer an alliance, and as the Order was the largest, he decided that could do the most good for the most people by joining the NPO and serving her loyally. His aspirations for the future are to continue to nurture and watch over his people, to leave a prosperous nation for his lineage and create a dynasty that will last for centuries, to help regain the power and glory that the Order once held in the eyes of so many within the Red Sphere and the rest of Planet Bob, and to continue to serve the Emperor and all Pacificans in any way he can. His most memorable moment as a Pacifican was standing proud in defeat after the Armageddon War, when so many jumped ship just as help with reparations and solidarity were sorely needed. He is proud of being able to aid in the postwar rebuilding process by procuring tech, and being of general service to the Order and Pacificans when called upon.

While in the Order, GodKing I has come into contact with many of his fellow Pacificans. More than one has strongly influenced his outlook and membership in the Order.

At the top of this list is TrotskysRevenge, Imperator Emeritus Revenge, Divine Bovine Overlord of the New Pacific Order, Moo-Cows with Guns. During his time as Emperor, TrotskysRevenge was always there for GodKing I (and indeed all Pacificans) when needed or asked.

Imperator Emeritus Cortath, Comrade Chuckles, GodKing I strives to serve him to the best of his ability. And the Dragon Queen, his newest leader will undoubtedly learn of GodKing I's devotion to the NPO

In general, GodKing I deeply respects Comrades Red, Overlord Zorak, and Imperial Emperor. The latter two have been his longest trading partners, and have kept his nation in the fight, while Imperial Emperor has gone out of his way to help GodKing I's nation and her people prosper.

Retrieved from "https://cybernations.fandom.com/wiki/GodKing_I?oldid=499641"
Community content is available under CC-BY-SA unless otherwise noted.