The GOONS-TSL Tech raid began in early October 2012 when Goon Order of Oppression, Negligence, and Sadism began raiding The Shadow Legacy, a micro-alliance made up of 6 ex-TSCE/TSA Members. DoorNail, the leader of TSL, defended his alliance and attacked GOONS nations. The GOONS' charter doesn't recognize alliances of such small size. DoorNail was sanctioned as a rogue by the GOONS senator, Umar ibn Abd al-Aziz of Umayyad Caliphate and stated they were compelled to do so. He was listed as an Enemy of GOONS (EoG) for attacking GOONS nations, to get off the EoG list he would need to apply to the GOONS "Mercy Boards" to plead his case. Due to his nation size being 100k+ nation strength, GOONS also enlisted nations from Umbrella to attack him.

On October 9, 2012, Pirates of the Parrot Order announced protection of TSL. The resulting thread turned into a massive debate on whether it was ethical for GOONS to condemn a nation to ZI when his only perceived "crime" was defending his alliance.

On October 20, 2012, nations from Kaskus began offering military aid to Doornail, in direct effrontery to GOONS charter. Sardonic, the leader of GOONS, said that they would overlook Kaskus' internvention in GOON affairs. Later Sardonic had DoorNail removed from their EoG list, ending the incident.

Kaskus established TSL as a protectorate on October 21, 2012. 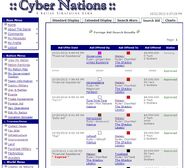 Kaskus nations along with Paragon and United Equestria aid DoorNail.

DoorNail no longer an Enemy of GOONS.
Community content is available under CC-BY-SA unless otherwise noted.