The flags of Nordreich have long been rallying points and symbols of pride for Nordlanders, representing strength, unity and above all loyalty to a common goal. Originally Nordreich flew only the War flag as designed by Sigmund Ceowulf for the original 2006 inception of the alliance. The Nordreich National Flag or Peace flag, as designed by Kaiser Martens wasn't put into use the 20th of December 2006- the day of Magnus Nordir's ascention to the Nordreich throne. In 2009, the flags were re-vamped for use in the re-established Nordreich alliance by Nordreich Minister of Culture, Sigurd Odinsson. The Nordreich civil ensign became a Custom Flag in-game on 24 April 2010. Nordreich's War Ensign was submitted to the Cyber Nations custom flag database on 21 May 2010 after Nordreich won the Amazing Like Race

The Quest for the FlagEdit 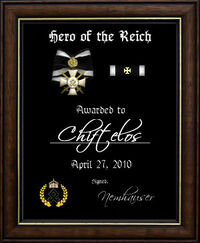 Nordreich won the ability to have her flag displayed to the world when Nordlander and ex-Reichsgeneral Chiftelos won round 10 of Cyber Nations Tournament Edition in the Nordreich's fourth coordinated "capture the flag" operation. The quest for the flag was a long one having come across several issues along the way—most notably the deletion of Nordreich's two top nations from CN:TE under accusations of cheating. Ultimately the bans were lifted in admission of error, but the two deleted nations were never restored. For Chiftelos continued efforts and devotion to the cause of Nordreich he was awarded the prestigious Hero of the Reich award by Reichskaiser Nemhauser on the 27th of April 2010.

Retrieved from "https://cybernations.fandom.com/wiki/Flags_of_Nordreich?oldid=451614"
Community content is available under CC-BY-SA unless otherwise noted.