Start a Wiki
Großgermania Portal
The title of this article contains the character ß.
Where it is unavailable or not desired, the name may be represented as Flag of Grossgermania.

The Reichsflagge (English: Imperial Flag) is the State Flag and Ensign and War Flag of the People's Empire of Greater Germania. The Volksflagge (English: People's Flag) is the Civil Flag and Ensign. The Reichsflagge, as opposed to the Volksflagge, uses the Imperial Eagle, or Reichsadler, of Großgermania, centered on the crosspiece of the two pieces of the Nordic Cross shown on the flag.

The colors black, red, and gold were used during the 1848 Revolutions as symbols of liberty, democracy, and freedom. The Reichsflagge combines these colors with the Imperial Eagle, or Reichsadler, a traditional symbol of German imperialism, to symbolize the combination of democracy and absolute monarchy present in the electoral monarchy of Großgermania, as well as the combination left and right ideologies present in National Unionism.

Various exact colors have been used for the flag of Germany since the first official adoption of the black-red-gold combination in the form of a tricolor for the Weimar Republic in 1919. The colors were not officially standardized until 1999, when the German government adopted a corporate design. These colors were officially modified for the new flag by Imperial decree on 1 May 2009, though the new colors had been in use, both by the Imperial Government and by other users, since the Empire's foundation on 12 December 2008.

The Imperial Standard of Großgermania (top) and the personal standard of Emperor Michael von Preußen (bottom).

Each Constituent Country of Großgermania has a separate national flag which is flown alongside the flag of Großgermania within that nation. The flags are also flown outside the Reichstag building in Nordhausen.

The flag of the Kingdom of Germany is a variant of the flag of the German Empire, originally used alongside the flag of the Großdeutsches Reich before being banned as 'reactionary' in 1935. The flag is a black-white-red tricolor with an aspect ratio of 3:5 (whereas the original Imperial German tricolor was a 2:3 ratio).

The original German flag used following reunification was a Nordic Cross flag consisting of the colors black, red, and gold. The idea of using a Nordic Cross on the flag of Germany first arose in 1944 and was used by German organizations resisting Nazi rule in the Großdeutsches Reich. The flag used at the time was red, with a yellow Nordic Cross outlined in black, and a black Nordic Cross therein, identical to the Volksflagge, except for differences in color shades. The flag had an aspect ratio of 3:5. Upon the formation of Großgermania on 12 December 2008, Michael von Preußen, King of Germany, opted to redesign the German flag from this so-called 'resistance flag'. The new design was announced on 19 December, and incorporated a gold Nordic Cross, with a red cross therein, on a black field. The color tones used differed from those on the Reichsflagge, and many believed the Reichsflagge should have been redesigned using the colors on the German flag. This call was rejected by the Emperor, who stated that the flag must maintain the colors in the exact shades they were used during the 1848 Revolutions - that is, as they are on the Coat of Arms.

The current tricolor was adopted on 27 December 2009.

The Dannebrog, the name for the flag of Denmark, is the oldest flag design in continuous use. Until its inclusion within the Association of Germanic States, Denmark's flag was rectangular in shape, aspect ratio 28:37, bearing the same general design to the current flag. The State Flag of Denmark was identical to the current one, with a lighter shade of red (similar to that of the Reichsflagge and Volksflagge).

The flag currently used as the national flag of Denmark was formerly used as the Orlogsflag, or naval flag. It was adopted as the state flag by the Kingdom upon joining the Association of Germanic States, and has an aspect ratio of 56:107.

The Principality of Luxembourg uses a flag designed by Alexandra von Nassau on behalf of the Principality following its incorporation into Großgermania in December 2008. Much like the flag of the Grand Duchy of Luxembourg, the flag incorporates a red-white-blue horizontal tricolor. The flag most noticably differs from the previous one in its inclusion of the coat of arms of Luxembourg (which remained the same as that of the Grand Duchy). It also uses a darker shade of blue, the same as that of the Netherlands, and the same shade of red as the Reichsflagge. It was shortened to 3:5 from the previous flag's aspect ratio of 1:2. The Grand Duchy's flag currently serves as the flag of the Province of Luxembourg.

Although most constituent countries' flags are identical to or are based on those of their predecessors, the Helvetican flag bears very little resemblance to that of the Swiss Confederation. The flag, like the name of the free land itself, can be traced back to the Helvetic Republic of 1798 to 1802. Almost identical to the flag of that nation, the only difference is that the modern flag lacks the phrase Republique Helvetique, which was featured on the central band of the flag of the Helvetic Republic. The flag is a horizontal tricolor of green-red-yellow, with proportions of 3:5.

The Kanarische Inseln constitute an autonomous territory of Großgermania. The flag of the territory was chosen by the Imperial Protector, Karl-Heinz Müller, shortly after their inclusion in Großgermania. The flag has origins dating to the beginning of the twentieth century, but was replaced by the government of Spain during their control of the islands. The flag depicts seven white stars, representing the islands, on a blue background. They are placed in alignment with the geographic relation of the islands to one another.

The following are flags used by the Provinces of Großgermania.

Flag of the Palatinate

Flag of the Saar 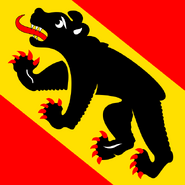 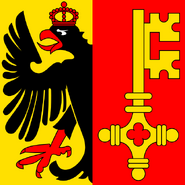 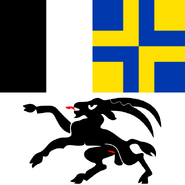 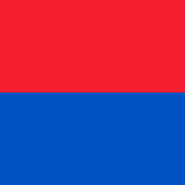 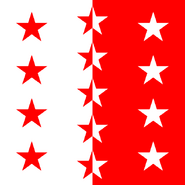 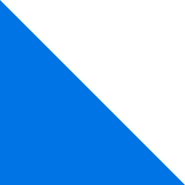 Flag of Alsace-Lorraine
Add a photo to this gallery

The following are flags used by Großgermania's predecessor states.

Flag of the
Holy Roman Empire

Flag of the
Confederation of the Rhine

Flag of the
German Empire

Flag of the
Weimar Republic

Flag of the
Kingdom of Denmark

Flag of the
Helvetic Republic 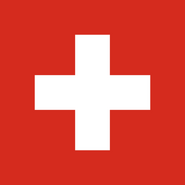 Flag of the
Swiss Confederation

Flag of the
Free Republic of
Alsace-Lorraine
Add a photo to this gallery
Retrieved from "https://cybernations.fandom.com/wiki/Flag_of_Gro%C3%9Fgermania?oldid=342892"
Community content is available under CC-BY-SA unless otherwise noted.