Start a Wiki
The flag of Disparu, also known as the Unity Flag (French: Drapeau de l'unité) is the national flag and ensign of Disparu. The Unity Flag is a red flag with a white square in its center, with blue stripes on both sides of the square, and features a stylized 11-pointed red maple leaf on its centre.

The flag was adopted on 10 March 2009 to replace the flag of Quebec and the Canadian flag, both of which were more or less used as the de facto flags of Disparu before the adoption of the current flag. The flag's official status is currently enshrined in the country's Basic Laws.

The flag's length is twice the size of its width. The white field is a Canadian pale (named after the previous flag), with a red maple leaf charged in its centre. The white field is bordered by two blue stripes on either side. This entire design is charged on a red field.

The maple leaf, a characteristic leaf of a maple tree, is a widely recognized symbol of Disparu since maple trees are commonly found throughout the country. It was also used as a national symbol of Canada, Disparu's predecessor. The number of points on the maple leaf does not necessarily represent anything. The white field represents unity and peace, the blue stripes represents Disparu's French culture and the red field represents bravery and progress.

As specified by the Commons' Flag Act of 2009, and reaffirmed by the National Assembly's Unity Flag Act of 2012, the official colours of the flag are listed below:

The flag carried during the National Day celebrations. Note that the shade of blue used is darker than the specified shade.

The flag carried at Montréal. 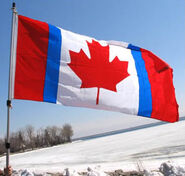 The flag at Ivujivik, the administrative seat of the department of Kativik.

The flag of Disparu is carried into the Olympic Stadium during the XXI Olympic Winter Games.

The flag painted on a building facing an intersection in Montréal, in support of the Disparuean team at the Olympics.
Add a photo to this gallery
Retrieved from "https://cybernations.fandom.com/wiki/Flag_of_Disparu?oldid=444045"
Community content is available under CC-BY-SA unless otherwise noted.