The First United Council (FUC or First U.C) is an alliance on CyberNations. On December 6, 2007 the First United Council came into existence. It's officially-designated team color is white, with few specially-authorized exceptions. On January 15, 2008 the alliance's leadership ratified an extremely important treaty rendering the First United Council a protectorate of the Order of Feudalistic Security (OFS). This treaty was voided due to the disbandement of OFS on May 7, 2008, effectively ending the protectorate status of the FUC under OFS. Subsequently, on May 26, only 19 days later, The FUC and The New Eclipse Order entered into an agreement, rendering the FUC a NEO protectorate. This was cancelled on June 15, 2008, when NEO cancelled all of their treaties due to a conflict with the Sultans of Swing. On July 14, 2008, the First United Council entered the Overlord's Protectorate Pact, a MDP bloc headed by The Phoenix Federation. On September 25, 2008 the FUC merged with The Sultans of Swing to form The United Foundation.

The merger between the three alliances occurred in the late hours of December 5 and the early hours of December 6, 2007, and were conducted by the now-President Millhouse (Coming From The Federal Defense Council), the ex-Vice President MacMo4420 (Coming From UCW), the former Secretary of the Treasury Tantonus (Coming From The First Union), and the former Secretary of State and Central Bank Governor tp71the2nd (Also coming From The First Union). This process included discussions over alliance structure, the Constitution, member rights, obtainment of power, government positions, foreign relations, and an alliance name, which wasn't decided until two days following the actual official merger date of the 6th.

The first few days of the alliance's existence consisted of a forum restructuring and management of a full member switchover, eventually ensuring that all members of the three alliances had officially switched over to the First United Council in their listed affiliation. It also was marked by appointment of government officials and Supreme Court Justices. The constitution was amended and also a $100,000 joining bonus for newcomers was implemented by the President.

After the first month anniversary, the First United Council was still trying to find its legs in the world. With frequent changes of the Secretary of Labor position, much of the recruiting and other aspects that allow alliances to grow went unaddressed. However, with President Millhouse's appointment of General Potere to the position, the First United Council was again on the road to prosperity with a recruitment program finally established by the new Secretary of Labor.

The day to day activities of the alliance still consisted of creating a strong government and policies to effectively run the alliance into the future.

In mid-March 2008, recruits were beginning to come in daily, and activity levels were really high. Then-acting Secretary of State Vladmir Vasquez planned PIATs with Macedonia and LUA. Then, on March 25, New Horizon Network merged with the Fellowship of Elite Allied Republics. But not all NHN members were happy about this, like Diogenes (now the Secretary of Labor of FUC) and Kyle Smith (now Secretary of State of FUC) who both joined FUC. Along with a few other new recruits, FUC's nation strength was launched to over 100,000 and almost 25 members. New incentives were added for people who recruited new members, and Secretary of The Treasury, Tantonus, got ready the first taxes that would be due on April 1.

In mid-May 2008, President Millhouse initiated a government shakeup, switching many government positions and moving some government members around. This went mostly smoothly, but it did upset two members in particular, the then-Secretary of the Treasury, Tantonus, and the then-Central Bank Governor, tp71the2nd, and they were publicly outraged and tendered letters of resignation within minutes of each other. They both later publicly apologized, citing it was anger in the heat of the moment, and chose to remain members of the alliance and to work in government still.

Starting with relocation to new forums on May 19, 2008, and in the wake of the government shakeup, there were many issues discussed, and some considered the discussions to be out of control. There was some contention over the lottery formed by the new Secretary of the Treasury, Blanketman. Also, with Tantonus' proposal to form an Intelligence Department in the alliance, dubbed the Federal Intelligence Service, came both support and criticism. Some felt that it would be a valuable asset to the alliance, others felt it might endanger the alliance if covert operations were discovered.

During this time, Tantonus also proposed an Academy of the First United Council. Both the "Academy" and the "Federal Intelligence Service" have since fallen out of discussion within the alliance.

On July 1, 2008 President Millhouse officially announced an alliance-wide State of Emergency and gave details of a plot to destroy the alliance being perpetrated by the short-lived Secretary of the Treasury Blanketman. By July 9, only 8 days later, all the conspirators had been forced out of the FUC and the issue was resolved.

On July 24 Tantonus resumed his post as Secretary of the Treasury.

When STA joined the BLEU-Continuum War (now known as the War of the Coalition) against all those attacking NpO, the OPP was ordered to attack STA. On August 13, 2008, at 11:53 pm, Secretary of State Kyle Smith announced the official declaration of war to the FUC and members were ordered to attack. The alliance DEFCON level was set at DEFCON 1. It was lowered to DEFCON 3 a few days later.

Soon afterwards, STA requested that NPO activate their MDP with them and attack the OPP, but NPO was involved with the Continuum side of the war, so they refused.

In mid- to late-September 2008, the First United Council officially completed the merger process with The Sultans of Swing and ratified a new constitution, under the new alliance name, The United Foundation.

This is the law of the land. The Constitution of the First U.C serves as the highest supreme legislative text within the alliance.

The leader of the alliance is the President, currently Millhouse.

From time to time the President authorizes Executive Orders, decrees that become law in the alliance and prohibit or require a certain action being taken. These orders do not need to be reviewed by the General Assembly, but can be deemed unconstitutional and stricken by the Supreme Court. After Executive Order 1-2008 was announced, there was much discontent within the government with President Millhouse's use of his authority to outlaw the practice of tech-raiding.

Prohibits any member of the First United Council from engaging in any form of tech raiding in game.

Repeals Executive Order 1-2008 in expectation of the Supreme Court deeming it unconstitutional.

Operated by the Secretary of the Treasury, this department is in charge of financial transactions incoming and outgoing involving the alliance, as well as monetary policy and loans. It is also responsible for the Alliance Financial Index (AFI), pioneered by Secretary Tantonus.

A diagram of the alliance's current economic and monetary structure: 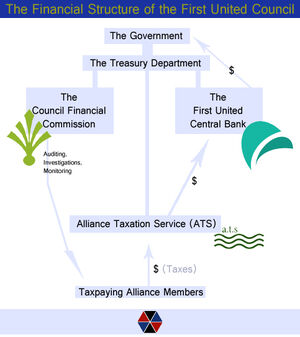 Operated by the Secretary of Defense. This department is in charge of military strategies and executing defensive operations for the alliance.

Operated by the Secretary of Labor. This department is in charge of education, recruitment, and member well-being.

Lead by the Chairman of the General Assembly, the GA is responsible for approval and debate of cabinet nominations, laws, and treaties. Those who serve in the GA are titled "Senators".

Lead by three Supreme Court Justices, the SC is responsible for hearing and ruling on cases brought to them by members of the alliance or top government officials, or cases which one of the three justices seems fit to be brought forward and ruled on. 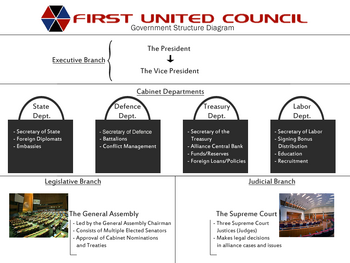 After their brief war with NEO, the Sultans of Swing came to FUC looking for diplomatic relations. A PIAT between the two alliances came into effect on 6/25/08. Link: http://forums.cybernations.net/index.php?showtopic=26452

Following The Phoenix Federation's offering of temporary protection due to the NEO conflict, TPF's protection of First United Council became more permanent when The Overlord's Protectorate Pact was offered. This MDoAP with multiple alliances went into effect on 7/14/2008. Link: http://forums.cybernations.net/index.php?showtopic=28286

On May 26, 2008, The New Eclipse Order and the First United Council signed the "NEO-FUC Protectorate" treaty, which rendered FUC once again a protectorate of another alliance. This treaty was cancelled on June 15, 2008, when NEO cancelled all of their treaties.

On April 11, 2008, the FUC and LUA ratified the First United Council/League of United Armenians (LUA) PIAT. Link: http://forums.cybernations.net/index.php?showtopic=19719 Treaty was voided on June 12, 2008, when LUA disbanded because of their involvement in the Continuum-NoV War

On May 12, 2008, the Secretary of State announced the first Treaty of Amity for First United Council with United Nations of Honour (UNH). Spurring from a small get together on the #cnfuc channel, UNH and FUC quickly bonded and agreed on this Treaty. Link: http://forums.cybernations.net/index.php?showtopic=22574 Voided on June 8, 2008 due to UNH's disbandment.

Protectorate of the OFS[edit | edit source]

In early January 2008, the Queen of the Order of Feudalistic Security (OFS) approached President Millhouse in hopes of making FUC a protectorate. Many members accepted the aid with open arms, others thought it might limit FUC's power.

On May 7, 2008, President Millhouse announced the cancellation and effective end of this treaty, rendering the OFS no longer the FUC's protector.

In Mid March Macedonia formed, with former Supreme Court Justice Blake Alexander being one of the new members. Then-acting Secretary of State Vladmir Vasquez made a PIAT was in order between the two Growing alliances. A little while later, Macedonia disbanded.

Retrieved from "https://cybernations.fandom.com/wiki/First_United_Council?oldid=480386"
Community content is available under CC-BY-SA unless otherwise noted.