The Exodus-UN War was a small scale war between Exodus and the microalliance United Nations. Exodus declared war on the United Nations on December 28, 2010 while accusing them and their leader of poaching, threats, and attacks on Exodus members.

A player by the name of President MAS joined Exodus in late 2010, and using the Exodus message boards, attempted to recruit members for a 'United Nations' alliance he intended to create. Exodus was alerted to this and provided screenshots by another Exodus member. Due to this, President MAS was promptly expelled from the alliance.

After being expelled, President MAS went on to create the United Nations alliance, and proceeded to use the alliance to threaten and then attack Exodus members for revenge due to him being expelled from Exodus, as he stated himself. Exodus then proceeded to declare a seven day war on UN and that President MAS, leader of the United Nations, would receive a zero Infrastructure sentence.

By January 3, 2011, the end of the 7 day period, there were no more wars left between the two alliances and the United Nations alliance affiliation was reduced to only 3 nations with an average of 507 nation strength, effectively disbanding the alliance. The ZI sentence on President MAS was carried out, and he thereafter deleted his nation, effectively ending the conflict. 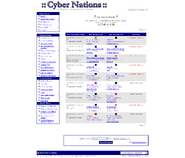 Initial Wars
Add a photo to this gallery
Retrieved from "https://cybernations.fandom.com/wiki/Exodus-UN_War?oldid=432042"
Community content is available under CC-BY-SA unless otherwise noted.