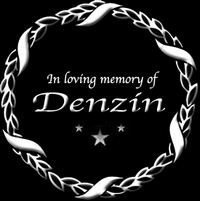 Denzin, ruler of Deinztiel, was a Member and long-term leader of the Mostly Harmless Alliance. He started his career in the MHA Bank, bringing reform and organization to the alliance's economic system, and as a result became a popularly elected Senator and then Overseer. After the Revolution, he became one of MHA's first and longest running Triumvirs, where he served from December 2007 until October 2008. He later worked as Government Advisor, Economics Specialist, and Minister of Foreign Affairs. He was respected within MHA for his intelligent, reasonable, and hoopy personality, as well as his many contributions to building the alliance. Internationally, Denzin was a diplomat and friend to many alliances, and was very popular amongst his peers and allies throughout MHA's membership within the Continuum. Denzin died on January 4, 2009.

Denzin originally joined the game in mid-February 2007 as part of the original Fark greenlight group, who "invaded" the game after a link to CN was posted on popular internet community Fark.com. However, seeing the situation that Fark was currently embroiled during the Holy War of Farkistan, and wanting to be able to properly play the game, he quickly left Fark and chose to join neighboring Aqua alliance MHA, on February 22, 2007.

His nation Deinztiel was located on the Aqua sphere, with the natural resources of Pigs and Wine.

From very early on, Denzin took an interest in the Banking departments of the MHA - notably the Tech Deal and Trade Deal sections, which quickly earned him a position within the MHA Bank. During GW3, Denzin took a lead role in ensuring that MHA fighters were receiving financial aid to rebuild and recover. He became Head of the MHA Bank during March 2007 and lead the department until May, where he brought reform, structured organization, efficiency, and new ideas to the alliance's economic system. He organized aid chains and 3x3 tech deals, improved Trade both within MHA and with our Aqua friends, initiated a structured rebuilding plan after GW3. planned infra jumps for members, and commissioned a special award ribbon for MHA Bankers to give them recognition.

As a result, Denzin is recognized as building the MHA Banking system. His programs are still used within MHA, and assisted in MHA's successful efforts to gain sanction later in the year.

Leading off his successful term as Head of the MHA Bank, Denzin was popularly elected as MHA Senator in May 2007, where he served until September of the same year. During his time as Senator, he continued to run MHA Aid Chains and assist the bank, courted interest for potential membership into the Initiative, co-signed a FAN Mutual Defense Pack, helped clean up the MHA forums, worked with the Grämlins on "Project Pheonix", helped bring tighter relations with the Grämlins, NATO and other Aqua alliances such as Oceanic Entente, initiated fun a games like a Mafia competition, opened thought-provoking discussions and debate on discipline and tech raiding, kept in constant contact with the populace, co-signed the Trident agreement, initiated the Head of Record Keeping department, resolved the Sanctum / Atlantis conflict with the MHA peacefully, pushed for tighter relations with Mushroom Kingdom, and helped prepare the MHA for the Unjust War.

Following his successful and hard-working career, Denzin was elevated to the status of Overseer, once previously occupied and on the same level as MHA's Founders. He helped to lead the MHA during the Unjust War from his new position and assisted the MHA Senate from September until November 2008.

During the Harmless Revolution, Denzin was a supporter and contributor to the original revolutionary document. He is recognized as one of the 2008 Revolutionaries.

Denzin was elected as one of the First ever Triumvirs of the MHA, initiated his term in December 2007. The following month, the MHA gained sanction status, a proud achievement helped by his previous work with the MHA Bank. It was Denzin who proudly accepted MHA's sanction, noting the hard work of our members and allies in achieving this goal. In addition, the MHA became a founding member of the Continuum, with Denzin signing the original Mobius Accords. Throughout his leadership, the influence and recognition of the MHA grew exponentially. The alliance rose through the rankings of Sanctioned alliances, passing old and established ones like GATO and GGA, even passing Continuum allies in TPF and Sparta. MHA also found new friends in TORN, ROK, and TOP, all resulting in Mutual Defense Pacts that Denzin co-signed with his fellow Triumvirs.

Following the GATO-1V War, it was Denzin who personally lobbied for opposition alliance USN to be given complete white peace. He personally took his case to the Continuum to allow for USN to be released from war without any terms, which the Continuum unanimously agreed upon. Denzin made the announcement on May 31, 2008, praising USN for their fearless defense of their allies. The announcement brought much praise and appreciation both internally and externally for the bloc.

MHA continued to grow in the rankings, eventually rising to the #5 position in Cybernations. However, following this great success saw a period of internal conflict within MHA, leading up to and after the formation of MHA's second off-shoot alliance, Argent. MHA recovered statistically and internally, but soon afterwards Denzin chose to take a break from the Triumvirate as of October 2008. He was immediately given the high title of Government Advisor, so that his contributions and opinions to the Government could still be heard. He also spent this time working a classified projected known as "Project Marvin", which would once again improve the MHA's internal systems significantly. Ever the hard worker, Denzin later returned to active Government work in December 2008 as Minister of Foreign Affairs (Babel Fish), which he was eagerly appointed to thanks to his years of experience, personal abilities, and respected position amongst MHA's allies and friends.

Following an absence, it was announced that Anthony 'Denzin' Kooistra died on the 4th of January, 2009. The following brief statement was made by Count Rupert, long-term MHA leader and friend:

Tributes and condolences flowed in from all over Cybernations, with friends and other players alike paying their respects to the departed Hitchhiker. Many spoke fondly of Denzin's leadership, friendship, and warm personality. The loss hit many hard within the game and was significantly felt within the community, and especially within the MHA. Cybernations had truly lost one of its greatest players and friends.

During MHA's Third Birthday Edition of their newsletter Don't Panic, the alliance made special tribute to Denzin, as a Hitchhiker who had contributed greatly over the past few years to help them gain their current position.

On the anniversary of his passing, the MHA made the following dedication to Denzin, as well as created this memorial.

Following his passing, the MHA sought to carry on Denzin's legacy within the alliance. The aforementioned "Project Marvin" was changed to be named after it's creator and specialist, becoming "Project Denzin". In addition, several of the aid structures and banking programs that Denzin established still continue to this day. The main internal Government forum for the Executive Body was changed from the Open Floor (as it had been named since the Revolution), to "Denzin Square" to commemorate Denzin's years as a leading Hitchhiker for the alliance.

The message "Remembering the lost Hitchhiker since 01/04/09" has featured in the topic of MHA's public IRC channel since his passing, as a tribute.

Denzin was posthumously awarded the MHA's Triumvirate Award of Excellence for his years of service and dedication to the MHA. He was the first of a very few to have ever been awarded this honor, he has set a very high standard of dedication and service.

Furthermore, the following banner was created soon after his passing and is still used by Hitchhikers and players alike:

January 4 is also considered to be a Memorial Day for the MHA to honor Denzin.

Retrieved from "https://cybernations.fandom.com/wiki/Denzin?oldid=451136"
Community content is available under CC-BY-SA unless otherwise noted.