The Complaints and Grievances Union (C&G or CnG) is an MADP bloc formed on 30 June 2008.

We, the four alliances you can't say on Planet Bob, have come together today, wondering what we're doing in Wisconsin, and pay careful attention to the fact that you are all plagued. As such, we hereby announce our existence as a coalition of alliances bound together in mutual defense and aggression, called the Complaints and Grievances Union (Hereafter known as C&G). We pledge the following in order to remain honest and true to our brethren:

We, the undersigned, remain true to each other, first and foremost, as friends and, more importantly, as equals. Our complaints and grievances stem from our similarities and brotherhood, and we can not be dissuaded from our bonds with our comrades.

We pledge mutual defense AND aggression in times of conflict, doing so with the utmost trust in each other's motives and reasoning. We live as one, and fight as one.

In the course of history, it is only natural for friends to make more friends. As we are open and accepting of our allies' allies, a new alliances may be accepted into the C&G union with a majority vote +1.

In some instances, an alliance may feel that they are simply going in another direction. If that is the case, the alliance(s) in question must submit a private resignation 72 hours in advance, notifying the group of its intentions.

In some instances, an alliance may take actions that the groups sees as unfit for the whole. As such, with a majority +1 vote, the group may expel the offending alliance.

This agreement is not a replacement for current treaties. Acceptance or withdrawal/expulsion does not void any treaties made outside of this agreement.

For Deck of Cards:
MoK, Dealer
Head penguin, Ace of Diamonds,
Imo, Ace of Clubs
Affluenza, Ace of Spades
Crash, Ace of Hearts,
Deck of Cards merged with the State of Unified Nations on July 9, 2008 to form Fly. Fly remained a signatory to this treaty.

For Vanguard:
Grand Architects of Vanguard
The Sovereign, Revanche
The Vizier, QTUN

Architects of Vanguard
The Sword, Napoleon
The Shield, Rafa Nadal
The Hammer, Thaliak
The Treasurer, Petrovich
The Scholar, Fire Within
Vanguard merged into Mushroom Kingdom on April 1st, 2010. 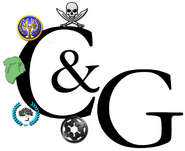 Add a photo to this gallery
Athens

Add a photo to this gallery
Federation of Buccaneers

Add a photo to this gallery
Greenland Republic

Add a photo to this gallery
League of Shadows Treaty

Add a photo to this gallery
Mushroom Kingdom

Add a photo to this gallery
Orange Defense Network

Add a photo to this gallery
Vanguard

Add a photo to this gallery
Honorary

Not Sure
for Unsure

Retrieved from "https://cybernations.fandom.com/wiki/Complaints_and_Grievances_Union?oldid=522830"
Community content is available under CC-BY-SA unless otherwise noted.