When the current coat of arms was revealed to the public, many Disparueans wondered as to why several Pokémon characters were used. Even though the Government has made no comment on this, it seems that the Pokémon-themed coat of arms is an inside joke for the members of the Disparu Committee. Critics who have noticed this have criticized this as an attempt to create a cult of personality around the members of the Committee.

The coat of arms is featured on many government offices and institutions, such as court buildings.

At the crest is an Eevee, representing unity and multiculturalism.

The shield features a white cross on a dark blue background, with a white fleur-de-lis charged quarterly on it, reminiscent of the flag of Quebec. The shield is mantled by red and white maple leaves, and has a compartment made from the fleur-de-lis. Both symbolize Disparu's cultural origins, Canada and France, respectively.

At the bottom, the shield is further supported by a beaver (left), representing the hard-working spirit, and a fox (right), representing knowledge. The fox is also the national animal of Disparu.

At the base of the coat of arms is the motto of Disparu: "Sans la démocratie, une nation n'a rien" (French for "Without democracy, a nation has nothing").

The shield formerly featured different symbols; however, they were all replaced by the fleur-de-lis following the Second Quiet Revolution. Following the abolition of the Monarchy, the royal crown that originally surmounted the shield has also been removed. The mantling and compartment were not part of the original design, and were only added later on.

Coat of arms of Canada (various) 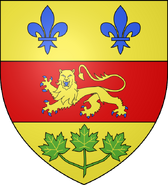 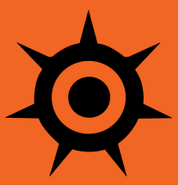 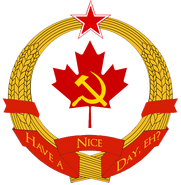 Royal coat of arms of Disparu (2009-2012)
Add a photo to this gallery
Retrieved from "https://cybernations.fandom.com/wiki/Coat_of_Arms_of_Disparu?oldid=444044"
Community content is available under CC-BY-SA unless otherwise noted.