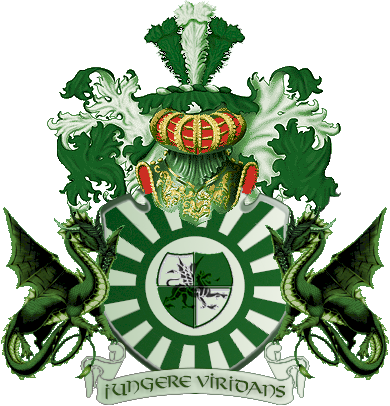 Article I. The Viridian Entente (herein referred to as “The Entente”) is an alliance open to all nations of the Cyberverse. It is the goal of The Entente to provide for the prosperity and defense of its members and the Green Team with honor, honesty, initiative, and innovation. All nations who join the Entente agree to abide by this document.

Article I. Every nation within The Entente holds the right to free speech within the alliance. A forum of the people will be provided so that each nation may freely air its grievances, suggest improvements, propose legislation to be voted on by the Parliament, and generally speak its mind. However, the Lord, Duke and Parliament, or any appointed moderators, retain the right to edit any posts made by members for the sake of clarity and organization, not censorship (save in instances as required by greater law), as well as the right to restrict conversing publicly on specific sensitive issues and during crises, in order to ensure a unified and clear message.

Article II. Any nation currently represented in The Entente has the right to secede at any time if it so wishes. However, it is required to submit a letter of resignation to the Lord of the Entente. If a nation wishes to be readmitted into The Entente, it must follow the same admission guidelines as first-time applicants. However, The Lord retains the right to restrict membership flow during times of war and mandate repercussions for desertion.

Article I. The Executive Branch of the Viridian Entente shall be comprised of and led by the Lord of the Entente. He is to be involved in all aspects of the game and all aspects of The Entente, with powers only limited where explicitly stated within the charter. The position of Lord is perpetual, only ending upon the wish of the Lord himself, or by process of impeachment.

Article II. The Duke of the Entente, appointed by the Lord himself with the advice of Parliament, shall serve as the second-in-command of the Executive Branch, assisting the Lord and fulfilling his various roles on a limited scale. The Duke retains all the powers of the Lord, save the ability to provide executive approval of treaties and legislation, make any changes in parliament, or declare war when not obligated by treaty. At the discretion of the Lord, the Duke may fill a vacancy in Parliament. The Duke will also vote as a member of Parliament.

Article VI. If a nation in any leadership position fails to fulfill expectations, abuses his or her powers, or does not have the confidence of The Entente for any reason, a vote of no confidence may be initiated. For a no confidence vote to carry forth, at least five general members and one member of Parliament must put forth the leader to be voted upon and the reasons for impeachment. A vote will take place among the general membership for no less than 48 hours and no more than 72 hours. A supermajority of four-fifths, from the voting membership, is required to remove an official from office. The Lord or the Duke of the Entente may also be removed by the unanimous vote of Parliament.

Article VII. The Executive is responsible for recruiting, processing, training, discipline, and management of members of the alliance. Furthermore, the Executive is also responsible for investigating violations of the Charter and alliance policies. The Executive will also oversee all matters and policies that pertain to the membership of The Entente. Finally, the Executive may discipline any nation found to be releasing private information to outside parties, or those who are deemed to be acting in a manner detrimental to The Entente. The Executive may empower an individual, or individuals, to handle the responsibilities outlined in Section III, Article VII.

Article VIII. The Executive is responsible for keeping track of and welcoming new Ambassadors and Diplomats to The Entente and is responsible for maintaining a presence in allied embassies, to ensure that The Entente maintains communication with its allies and political interests. The Executive may empower an individual, or individuals, to handle the responsibilities outlined in Section III, Article VIII.

Article I. Parliament shall be composed of Secretaries and the Duke of the Entente. Parliament can vote to ratify or reject amendments, to make laws and policies, and to decide other matters relating to the good of The Entente and its member nations. All members of Parliament may only vote once in any given matter, and no vote will wield more power over any other vote. All legislative votes need a simple majority to be passed. Members of Parliament shall be automatically reappointed every three months. The Lord has total authority on the composition of the Viridian Parliament at any time.

Article II. All Parliament members must sign in when they vote, declaring that they have voted but not specifying what they voted for. If any Parliament member misses more than three votes without excuse, that Parliament member will instantaneously be removed from their position, with a replacement selected by the Lord of the Entente. The period of voting will consist from the time the vote is posted by a Parliament member, or the Executive, and last for one week. At the end of the voting period, if there is a tie, the Lord of the Entente may either veto or ratify the legislation, otherwise the issue voted on automatically fails if no majority in favor of the proposed legislation is reached.

Article III. The Departments of Parliament shall be designated and filled as such, with the Secretaries having total dominion over the affairs delegated to them, submitting only to the will of the Executive.

Article IV. In the event that a Secretary must abdicate or resign from his or her position, the Lord shall appoint a replacement at his or her discretion.

Article I. If a nation finds that the Charter of The Entente needs to be amended, it is to bring the correction to the attention of the Parliament. An amendment will then be written and presented to the Parliament to be voted on. The amendment must pass with a simple majority and be approved by the Lord of the Entente to be ratified. However, an amendment may also be ratified by the unanimous vote of Parliament.

Retrieved from "https://cybernations.fandom.com/wiki/Charter_of_the_Viridian_Entente?oldid=519257"
Community content is available under CC-BY-SA unless otherwise noted.