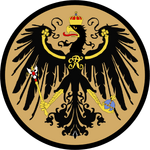 In the politics of the United Provinces of Clinkham Wood, the Cabinet is a formal body composed of the most senior government ministers chosen by the Stadtholder. Most members are heads of government departments with the title "Secretary of State for ...". Formal members of the Cabinet are drawn from the Federal Council and Federal Assembly.

Following his appointment as Stadtholder, Gavin Jones announced his first Cabinet on 30th May 2008. The most recent cabinet reshuffle was on 5th December 2009

Retrieved from "https://cybernations.fandom.com/wiki/Cabinet_of_Clinkham_Wood?oldid=343456"
Community content is available under CC-BY-SA unless otherwise noted.