The Bermuda Union (also referred to as Bermuda Empire or the Union) is a country in the North Atlantic Ocean. Its sovereign territories are Bermuda, Florida, South Carolina, and Georgia.

The Bermuda Union is also one of the biggest importer of BLITZ weapons.

The three U.S. states that compromise the Bermuda Union were key factors in the fall of the United States. These states were some of the first ones to separate themselves from the U.S. government which incited other states to do the same. Soon, anarchic movements were threatening the organized government of the independent nations of Florida, South Carolina, and Georgia. These nations formed an alliance to protect the existence and interests of each other against the current rising threats. This alliance attracted another nation, Bermuda, to join the mentioned alliance which coined it the name Bermuda Union. However, internal conflict between the signatories of the alliance, with provocation of military conflict, led to its disbandment.

The Bermuda Union was soon reformed when the signatories were threatened by bigger nations and were slowly being invaded. To save themselves from utter destruction, they once again formed the Union but this time, as a nation not as an alliance to prevent its disbandment and decay.

The Bermuda Union, though regarded as a nation, is actually an alliance of four independent micro-nations which are called state-signatories.

The Union is led by the Chairman, the head of all the Board of Directors and of the alliance. The Chairman has the overall power of the government and is elected by the people from the current board. The Board of Directors are the head of each of the four state-signatories that forms the Union. Each Director has the power compared to a governor and manage each state-signatory of their birthplace.

The Chief Executive Officer is the head of the cabinet and holds limited powers of the chairman. The Cabinet is comprised of Secretaries of the State who govern a state department each according to their respective expertise.

The Bermuda Union has a very strong economy with no recessions since its formation. With its strong economy, the Union was able to sign the Technological Equality Deal with the Pacific Empire.

The foundation of the Union's economy are the transportation, mining, energy, construction and manufacturing industries.

The League Militaire is the official military and armed forces of the Bermuda Union. Its branches are: 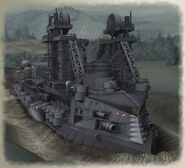 The Republic of Oceania has formal relations with the Pacific Empire through the Technological Equality Deal.

Retrieved from "https://cybernations.fandom.com/wiki/Bermuda_Union?oldid=438197"
Community content is available under CC-BY-SA unless otherwise noted.