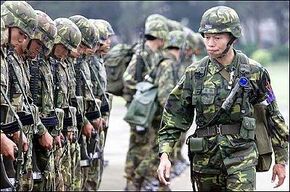 The Army of the Republic of Pacific Orange or ARPO is the Pacific Orange Self Defense Forces branch responsible for the co-ordination, planning and execution of all land-based operations involving POSDF forces. It is the largest and oldest branch out of all the POSDF arms and thus functions as the nation's primary operational force. In terms of actual military strength, ARPO currently comprises of approximately 25 000 active duty military personnel, deployed at the various military bases throughout the Republic of Pacific Orange and the local region.

All Pacific Orange males above and including the age of 21 are expected to serve at least temporarily in the nation's armed forces as part of their national military duty and a sizeable number of conscripts often elect to spend their duties serving out commissions in the ARPO. From amongst these conscripts, some may decide to remain and retain their commissions in the ARPO whilst others go on to serve as part of the National Reserves. These reservists form the bulk of the nation's trained manpower pool during times of war. A multiregional force, the army draws troops and conscripts from all the seven regions and part of all regional taxation revenue goes towards the upkeep of the ARPO Corps stationed in that particular region.

The ARPO also has primary responsibility for maintaining the peace and security of the country, patrolling the borders and conducting counter terrorist operations. It also conducts rescue and humanitarian operations during calamities and disturbances, and has frequently been called upon to maintain the internal security of the country in the past against domestic threats. The ARPO has rich combat experience in a diverse range of terrains, considering Pacific Orange's variety of climates and environments, and from the 1980s onwards has also had a distinguished history of serving in international peacekeeping operations.

Structure of the ARPO Edit

The ARPO consists of two primary forces: the active duty Regular Army of 35 000 troops ( including both conscripts and full time personnel ) and the infantry component of the National Reserves. The latter is primarily composed of reservists who, having served already as conscripts in the Regular Army, recieve two weeks of annual military training each year and in times of way form a large, fully trained military manpower pool for the nation to draw on for its defense.

In times of war, these reservists can be thus called into active duty as part of the units with which they trained in. Whilst technically the National Reserves come under regional rather than federal authority, the reserves can be federalised under presidential order. Under the 1980 Military Reform laws, the army is led by a military Chief of the Army, who reports to the popularly elected and civilian Minister of Defense, who in turn is answerable to the President and Pacific Orange Parliament.

Furthermore, all decisions and purchases made by the army need to be first approved by the Pacific Orange Legislative Assembly's Military and Defense Appropriations Committee who act under the guidance of the Minister of Defense. In addition, all major military appointments within the ARPO above the rank of general can only be made with the consent of the Pacific Orange Legislative Assembly. Thus the Chief of the Army in essence has only the responsibility of organising, training and equiping the army thus helping to bring the ARPO - for a long time an independent and powerful force in Pacific Orange politics - under civilian control.

Currently, the ARPO operates 7 active operational commands based in a particular region which are tasked with the responsibility during peacetime of running the day to day management of the ARPO corps assigned to that region. Each command headed by a general whose appointment has been previously approved by the Pacific Orange parliament. Neverthess, in order to facilitate a rapid response to any invasion or national security threat, all operational commands are directly subordinate to the orders of the Chief of the Army and ARPO HQ in Saint Victoria.

Formations within the ARPO Edit

The ARPO consists of seven corps each containing some 5000 men raised from a particular region. The corps serves as the standard military organising unit of the ARPO and is headed by a general who is in turn delegates battlefield authority to a colonel etc. With the national draft service, most corps are currently split 50/50, comprising of 2500 active duty soldiers and 2500 national conscripts. Stationed in the region from which its soldiers are drafted, transfers between corps are nonetheless commonplace. Under the 1980 Military Reform laws, each corps is either a:

Corps designated as a Ranger Corps enjoy the distinction of being one of the ARPO's premier formations, boasting the latest and most sophisticated training, equipment and weaponry. Ranger Corps are designed as a flexible, highly-trained alight infantry force with specialised skills that enable them to be deployed against a range of targets under a variety of environments and pressures. Unlike other corps within the ARPO, all members of a Ranger Corps are full time active duty personnel who have both served at least four years within the army and been recommended for service in the Ranger Corps. Generally considered to be the backbone of the ARPO's fast response capabilities, each Ranger Corps can be deployed anywhere around the world within 24 hours notice. Current corps within the ARPO designated as a Ranger Corps include:

The lessons of the September Invasion during the Second Great Patriotic War showed the need for the ARPO to maintain an operational mechanised component capable of dealing with enemy armour on the field as well as provide armoured assistance to ARPO troops. Thus the ARPO Armoured Corps were born. Each corps consists of armoured units as well as regular ARPO infantry with special emphasis being placed on coordination between infantry and armour and the integration of infantry / armour tactics and strategies. ARPO artillery and engineering units are also assigned to an Armoured Corps and hence officers belonging to such corps most often have an engineering education background recieved either at university or the ARPO Officer Training School at Fort Duncan in the Central Highlands. Current corps within the ARPO designated as an Armoured Corps include:

As a primarily land based military force, the backbone of the ARPO still remains its infantry units. Corps designated as an Infantry Corps rely mostly on infantry troops who fight on foot with most of the weapons employed by these corps being personal or crew-served weapons. Nevertheless, infantry corps do utilise a variety of vehicles from humvess to APC's to even helicopters and aircraft for transport, scouting, troop mobility, security, and command and control. Nevertheless, since personnel assigned to an Infantry Corps enjoy the least amount of military training required, postings to an Infantry Corps are highly sought after by most national conscripts looking to minimise their involvement in the POSDF. Current corps within the ARPO designated as an Infantry Corps incldue:

History of the ARPO Edit

The history of the ARPO can be divided into three periods:

Retrieved from "https://cybernations.fandom.com/wiki/Army_of_the_Republic_of_Pacific_Orange?oldid=304489"
Community content is available under CC-BY-SA unless otherwise noted.