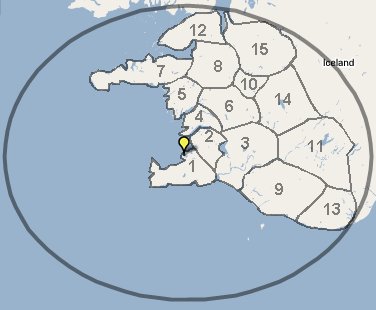 Araritas is the nation’s capital and resides in a state of the same name. It houses the major political facilities as well as the nation’s extensive bank system. The Headquarters for the Araritic Bank is the backbone of the Republic, in most cases it is considered more important than the King’s Estate. Much of the military resides in the city to protect the King. It is also a rich shipping district.

This state was the second to be formed and lies out of the limelight after it’s more influential neighbor, Araritas. Spolium is tied for second largest city and lies on the Crossroads between the eastern shipping region and the western agricultural. It’s generally an unimportant state in the grand scheme of things.

Igersus is the major agricultural center for the nation and produces most of the swine to be exported. Much of the nation’s food is produced here and sustenance fishing supports it and a few neighboring states. Few cities rest here, but hundreds of family farms dot the landscape, most of which raise pigs. The sausages in this area are some of the best in all of Europe.

This state grew with its beautiful beaches and shipping. It served as a shipping point for the northern states in the Repulbic’s early years, but has since become little more than a hub and tourist attraction. It boasts nothing but 5 star resorts and water so clear you can see the seafloor a mile out. It was the first region to peacefully join the Republic after the revolution began to calm down.

The state of Creonay entered the Republic with mixed approval from its people. At the time, the people were not doing great economically and in order to appease the population, Neuschiff Corp. an organization that now is the primary naval development center for the Republic. That paired with lovely beaches like its sister to the south have brought Creonav back into wealth and settled any uneasy feelings for the Republic.

The Heartland of the Republic, rolling fields supports farming for much of the Republic. They ship food all over the States where sustenance farming falls short. The bovine population is close to that of the human population with huge cattle farms and low population density allowing for this to occur. Civibos is easily the smallest of the state capitals as there are no big cities in Viscusager, only small towns where the farmers bring in their harvest.

The coastal region of Iugosus is dotted with picturesque mountains and rich in Old Norse Culture. The capital of Rif is somewhat isolated as it boxed in by mountains, but it was a major shipping hub and so it remains today. It houses the major shipyards of the Republic, as it is rich in minerals and superior timber that thrives on the slopes of the mountains. The area is also known for it’s Ski Resorts.

The rolling plains in this area are used for other purposes than farming. It is the wide-open spaces that allow it to become the major airfields for the Republic. Though the Republic doesn’t maintain an Air Force, the facilities in Divurfab remain capable of producing military craft and all international pilots are considered members of the military and are trained to pilot military craft in the event that they would be called upon.

Hoarend and its island capital are the main shipping ports of the Republic; the few military vessels reside here as well as do a majority of the trade ships and aircraft. It is the closest to the rest of the world and as such was strategically chosen for it’s job. Araritic Shipping Co. is centered in this region and controls much of the nation’s trade. National organizations have relocated here in order to watch over shipping agreements.

The primary development and testing facilities of the Republic are headquartered here. Military and civilian research goes on and many revolutionary improvements have been created here. The main R&D corporations are Techie Corp and Vammoose Co. They lead the industry and hold hundreds of thousands of patents to their name. Most of the information about this region has been deemed classified, even it’s capital doesn’t appear on the maps.

This is another shipping area of the Repulbic and isn’t too remarkable. Pig farms are in the northern areas while to the south are many ports and industrial facilities. A factory system has been planned for this area in the near future.

This is a relatively barren region of the Republic and doesn’t have much to its name but it is home to some of the fiercest soldiers the Republic has ever commissioned. The soldiers have been commissioned into their own division and operate as a strictly infantry force with helicopter support and transportation. Most serve as the King’s personal guard and patrol the Estate.

Blanda is a mountainous and coastal region where some highly experimental navel research and for the most part is a spill over from Gewehrland. It formed more as a result of there being a bunch of people living within the technical bounds of the Republic but having no state to call their own.

Kjolur followed into Blanda into statehood for similar reasons, but with no R&D divisions operating there. Very little can be said for this sate and even fewer are there to say anything. All in all it’s a pretty open state that does little but contribute taxes. In the future, officials hope to kick start this region by making the head of the education department.

Retrieved from "https://cybernations.fandom.com/wiki/Araritic_States?oldid=451815"
Community content is available under CC-BY-SA unless otherwise noted.