Aleks was born in the United States in Charlotte, NC to Russian parents on September 6, 1980 . He only lived in the U.S for one year before returning to Russia. When he was a child, his father was in the New Pacific Army, the army of the NPO. Aleks later joined his state into the NPO.

During the Great War, Aleks' father was killed. He was 26. From then on he started making plans of taking control of some of the rural area around him.

In January, he decided to act. Him and his small group of militia men started to tell the local villagers to obey him or be killed. He set up a camp for his guerillas and they soon started collecting taxes from the people in the area. His group of soldiers was only about ten men and they controlled about 50 citizens. He declared the 2 mile area his land and that it was called Stalven. His rise to power just begun.

Near the end of Feburary, Stalven had a well equipped army of over 1,000 men. But another country was seen as a threat, Finnland. The whole state of Stalven was worried of this country several hundred miles away that was testing new long range missles with it's increasing technology. Aleks saw this is a threat, and declared war on Finnland on the 28th. He ordered a beach invasion on the same night. The invasion was a sucess. It caught Finnland's ruler, Micheal Finn, off guard. Stalven troops killed over 400 Finnish troops and captured 350. This was a largeamount of Finnlands army held hostage. Stalven said it would release the POWs if Finnland stopped the missile program. Micheal would'nt listen though, so Aleks ordered a tank brigade to storm Ithaka, the Finnish capital and take control. Micheal finally agreed to peace 2 days later and stopped the missle project. This was Stalven's first military victory. 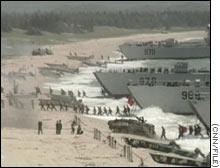 Soon after the Finnish war, the ruler of the guerilla group "Spartans" in Greece started protesteing the Stalven military action in Finnland. The sent videos of flag burnings and violents protests. This was seen as a terrorist threat and a special forces team was sent to the Spartan guerilla camp to take it out. Several the guerillas fought back hard and took the troops hostage. Stalven refused to pay the ransom and bombed the guerilla camp. The hostages were rescued and the remaining enemy forces were killed. Stalven lost 126 troops, but the Spartan group of 350 was destroyed completely. Aleks was wounded in the raid, he was shot in the arm by a stray bullet. He recovered from his wound in a military hospital.

Over the next several months, Stalven improved rapidly. Its citizen number increased from 1000 to more than 3000. It got a bank system and factories were built in the capital city. The economy increased rapidly and new technology and services were availible to the public.

The Spies and Legion ConflictEdit

In May, a leak in the government offices gave away information to the Legion alliance that Stalven spies were iniltrating Legion forums. Aleks immediatley attacked 3 Legion nations. They were attacked by cruise missles, troops, and bombing raids that brought great destruction to cities and infastructure. Stalven was flagged as a rouge by thePO and hunted down being forced to pay reperations. Aleks fled the country, heading south in his plane. 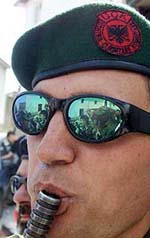 Aleks before boarding his plane with his personal bodyguards.

With thier ruler gone, the citizens of Stalven are in panic. There is no definite ruler. They country has to pay reperations but can't afford after an economic depression. Aleks is being hunted for with a bounty on his head of 5 million. This page will be updated soon when more informatio is available.

Retrieved from "https://cybernations.fandom.com/wiki/Aleks_stalven?oldid=370075"
Community content is available under CC-BY-SA unless otherwise noted.