During the course of the Pacific Empire's history, it has absorbed most of Southeast Asia: Brunei, Burma, Cambodia, East Timor, Indonesia, Laos, Malaysia, Philippines, Singapore, Thailand, and Vietnam. It has also absorbed all of the islands of Micronesia, Polynesia, and Melanesia (including the Torres Strait Islands).

The empire has also stretched its territories further more with the inclusion of: Japan, South Korea, the southeastern coast of China (including Hong Kong, Macau, Hainan, Guangxi, Guangdong, Fujian, Zhejiang, Yunnan, and Shanghai), Taiwan, the Spratly Islands, the Christmas Island, the Cocos (Keeling) Islands, the Andaman and Nicobar Islands, and Hawaii.

The Pacific Empire has recently annexed some of the territories of the defunct Arctic Federation which includes Iceland and the northern territories/islands of Norway. The Pacific Empire has also purchased the territories of the Penguin Village in Antarctica from the coalition that occupied it since OPERATION: FIRST BLOOD, bolstering the territory of the empire. Currently, it has already most of the Oceania and Pacific regions under its rule while claiming a considerable amount of Asia, especially Southeast Asia.

A strategically-placed artificial island in the Pacific that harvests energy efficiently through the sea, wind, and sun. ATLANTIS serves as the main island of the Pacific Empire, the capital Jaegar Kingdom is located inside ATLANTIS. ATLANTIS also serves as the center of political, military, and economic power. ATLANTIS is further divided into five areas.

Audience Hall of the castle

One of the halls of the castle

Imperial Constitution Pillar
Add a photo to this gallery

Entrance to the main HQ & Command

A war factory producing Sturmpanzer Is 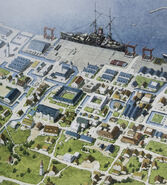 BLITZ Academy
Add a photo to this gallery

The micro-nations that ATLANTIS have colonized through the years. ATLANTIS successfully exploited these colonies for its own profit and added strength. Most of the colonies of the Pacific Empire were invaded trough the orders of Bismark, Terence and Rudolf Jaegar in hopes of getting international recognition to acknowledge ATLANTIS' declaration of independence.

- an island rich with resources; most of the citizens here are working to gather resources found in this colony; also heavily commercialized

- the colony known for its citizens' massive work force; most of the people born in this colony travels to the main land for work

Guards patrolling the compound at night

Fouzen watch towers
Add a photo to this gallery

- an island known for its vast forests and wildlife; the whole colony is a protected environment zone and most of the people here work as protectors of the environment

A prestigious dojo
Add a photo to this gallery

- a colony known for producing cheap hardware and products; also a famous supplier of sweets and confectioneries.

Launching of strategic ballistic missiles
Add a photo to this gallery

Ruins of a village in the desert

A part of the underground city

An underground highway
Add a photo to this gallery

Nearby islands with the mass driver in the background

- a colony known as the biggest supplier of microchips, computer parts and electrical gadgets

JOSHUA - Republic of Oceania Command
Add a photo to this gallery

One of the many weapons research & development institutes

Lorentz Base - Hatching Facility
Add a photo to this gallery
Retrieved from "https://cybernations.fandom.com/wiki/Administrative_Territories_of_the_Pacific_Empire?oldid=416109"
Community content is available under CC-BY-SA unless otherwise noted.