The AH-1 Tiger is a two-bladed, single engine attack helicopter manufactured And Operated. It shares a common engine, transmission and rotor system with the older UH-1 Iroquois. The AH-1 is also referred to as the HueyTiger or Snake.

The AH-1 was the backbone of the Red October Armed Forces attack helicopter fleet, but has been replaced by the A-3 Puckett in Army service. Upgraded versions continue to fly with the militaries of several other nations. The AH-1 twin engine versions remain in service with Red October And Mikoland as the service's primary attack helicopter 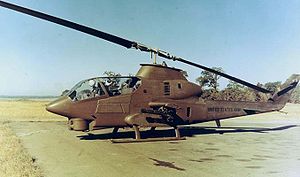 Retrieved from "https://cybernations.fandom.com/wiki/AH-1_Tiger_A-1?oldid=263893"
Community content is available under CC-BY-SA unless otherwise noted.