Sekowo (せこを) is a growing nation located on the island of Honshū. The country is centered at its capital in Tokyo, which was also the former capital of Japan.

Sekowo is considered a benevolent dictatorship, though its government system is very unique as it has many qualities of a typical democracy. The Head of State and of Government is the President, who is the "benevolent dictator". He has a Cabinet, who's members are approved by the unicameral National Assembly, who's members are elected directly by the people in democratic elections.

Internationally, Sekowo is a member of the alliance Bushido.

The nation of Sekowo formed on November 21, 2009 with its government centered in Tokyo. Sekowo grew slowly in the following days, and also on the twenty-third it joined Bushido, an international alliance. Not long after joining, Sekowo was sent a generous amount of aid by the alliance and growth in the nation began pick up at a rapid pace. The rapid growth became interrupted though when the nation was suddenly attacked by the country of Niger. 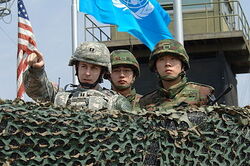 At approximately 6:00 PM on December 1, 2009 Sekowo came under attack by the rogue nation of Niger. The attack was a complete surprise and threw Sekowo into anarchy. President Ryouta quickly restored the military and began to build up defenses for future attacks by Niger. Those attacks came and Niger faced its first defeat in the Niger-Sekowo War due to Sekowo having been now fully prepared for war and at DEFCON 1. In the evening of December 2 Sekowo made its first offensive against Niger by launching two cruise missiles at its capital and then making a small attack on the nation. While this small offensive classified as a loss for Sekowo, the military managed to pull of killing more Nigerien troops than they killed of Sekowan soldiers. The next day the war ended when Niger declared an end to hostilities after being prompted to do so by his alliance. In total, 1,638 Sekowan soldiers died and 1,875 Nigerien soldiers died. Because of Sekowo's huge growth and recovery from the conflict, it is considered that the Niger-Sekowo War was a victory for Sekowo.

Sekowo has a complex form of government that is a mix of a benevolent dictatorship with your common democracy. The Head of State and Head of Government is the President, a position currently held by Ryouta. The President has a plethora of powers, though he often chooses to limit the extent at which he does use those powers. Overall, he has the final word over everything and this is what leads to Sekowo's classification as a benevolent dictatorship.

While the President holds many powers, there is still a legislature, which is the unicameral National Assembly. The National Assembly is comprised of 300 assemblymen elected directly by people of Sekowo every two years. The nation's states are divided into districts, and each district elects one assemblyman. The legislature creates and votes on most the laws of the nation and are granted this ability by the President; though the President still holds the ability to do a complete bill veto, which stops the bill from even having its veto overturned. While this ability does exist, the President has never used it and usually allows the National Assembly to operate freely, only approving bills and using normal veto power.

The judiciary of Sekowo is headed by the Supreme Court, which is comprised of 7 judges chosen by the President and approved by the National Assembly (if the President chooses to see the Assembly's opinion). Every state has a regional court, and then most local governments have courts as well.

Every state in Sekowo is led by a Governor, who is elected directly by the people of his state every four years. The states also have local legislatures that vote on local issues. Every city has a mayor and some sort of city council. States are divided into counties; and also divided into assembly districts, though these only have meaning in the election of assemblymen to the National Assembly. Counties often have a council that operates in much the same way as city councils.

Currently Sekowo is divided into two states. Every state is further divided into counties. Each state is headed by a Governor, elected every four years, and state legislature for state/local issues. States also have assembly districts for the election of National Assembly members.

The bulk of Sekowo's of foreign relations revolve around Bushido, an international alliance which Sekowo is a member of. Sekowo is largely non-interventionist, and its only war, the Niger-Sekowo War, was an unprovoked and rogue attack. The country has recently begun participating in technological deals with larger countries, its first deal occurring on December 4, 2009 with the Land of Lightning, a member of The Order of the Paradox. Millions of dollars of aid have also been put into the Sekowan economy by larger member-states of Bushido. In regards to international trade, Sekowo currently has trade agreements with West Vargos (RSS), the Illini Federation (Bushido), and the Clarktopian Union.

Sekowo has a strengthening economy with its main industries being in the areas of technology, electronics, manufacturing, banking, and manufactured foods. Its terms of agriculture, the nation has a large fishing industry and it also produces pork, beef, rice, sweet potatoes, wheat and barley.

The culture of Sekowo is a fusion of both Japanese and American culture; with influences from China, Korea, and Taoic religion as well.

Holidays in Sekowo originate from the both the Japanese and Americans. Some holidays, like Thanksgiving for example, are mainly celebrated by the American Sekowans. Not all holidays on the list below are public holidays (such as Black Friday). Some holidays of foreign origin also have become popular among the whole population, a good example of this would be Christmas.

Retrieved from "https://cybernations.fandom.com/wiki/Sekowo?oldid=463845"
Community content is available under CC-BY-SA unless otherwise noted.