This Alliance is Part of the Axis Sphere 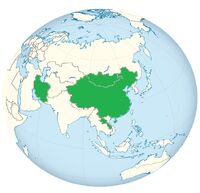 The Eastern Alliance and Socialist Treaty, more commonly referred to as the East, is a mutual defense treaty and military alliance between 4 states of Asia, Iran, China, Mongolia, and Laos. The Alliance is based on the protection of communism, nationalism, and partially capitalism. The EAST is a military alliance. As new countries were being established, China wanted to control those countries by forming a government like the Chinese. Iran, despite being a islamic theocratic state, formed an alliance with China, supporting the new governments (because they were not that friendly with the U.S government), and formed the EAST. The EAST opposes the Western Economic Supreme Treaty and has since been trying to make severe sanctions against the west.

The Eastern Alliance Socialist Treaty is a Soviet military reaction to the integration of West Germany[1] into NATO in 1955, per the Paris Pacts of 1954.

Retrieved from "https://cybernations.fandom.com/wiki/Eastern_Alliance_Socialist_Treaty_(EAST)?oldid=473428"
Community content is available under CC-BY-SA unless otherwise noted.