The title of this article contains the character ß.
Where it is unavailable or not desired, the name may be represented as Coat of Arms of Grossgermania.

The Coat of Arms of Großgermania is a symbol of the People's Empire of Greater Germania, featuring a double-headed eagle. The colors of the coat of arms are those on the flag of the Empire: black, red, and gold. The shield is supported by six tricolor standards, used in Germany as the state flag from 1919 to 1933. The coat of arms has a gold star as its crown, symbolizing the socialist aspects of National Unionism, the double-headed eagle representing those imperial aspects of the political-economic system.

An alternative coat of arms, more properly an insignia, is similar to the version of the Reichsadler used as the national insignia under Nazi Germany, but with the axe and sickle, a symbol of National Unionism, used in place of the swastika, which fell out of popular use worldwide following the collapse of Nazism in Europe. Officially, this is simply a symbol of the National Unionist Party of Großgermania, but it is often used as a state symbol on documents, as it is simpler to render than the official coat of arms when printing. 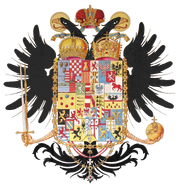 Arms of the
Holy Roman Empire

Coat of Arms of the
German Confederation 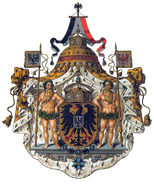 Personal Arms of the
German Emperor

Coat of Arms of the
German Empire

Coat of Arms of the
Weimar Republic 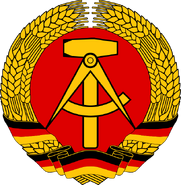 Coat of Arms of
East Germany

Coat of Arms of
West Germany and
reunited Germany
Add a photo to this gallery
Retrieved from "https://cybernations.fandom.com/wiki/Coat_of_Arms_of_Gro%C3%9Fgermania?oldid=369995"
Community content is available under CC-BY-SA unless otherwise noted.